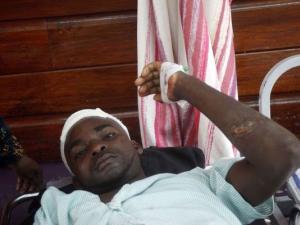 Eleven people have been arrested on allegations that they seriously wounded Mombasa residents in an ambush on Sunday.

Ten people, most of them businessmen heading to Kongowea market, were injured in early morning attacks in Kisauni and Nyali constituencies by machete-wielding criminals.

The suspects are being held in Nyali.

“Some were arrested immediately after the attacks. We are questioning them before we produce them in court,” said Sub-county Police Commander Simon Thirikwa.

It is believed that a new gang called 86 Battalion was behind the attacks. However, County Commissioner Gilbert Kitiyo said it emerged that a majority of the suspects were from Kisauni.

Mr Thirikwa said on Monday that the attackers are “common criminals who are going to be dealt with in accordance with the law".

Kisauni has been notorious in crimes perpetrated by youthful criminals armed with machetes and knives.

The suspect in his early 20s was gunned down while three others were arrested during an operation.

Photos of those arrested shocked residents when they were shared on social media platforms as they were juvenile.

Police said machetes were recovered from them.

The attacks took place despite a promise by police that the criminals would be dealt with and security measures taken.

Among them was appointment of an elite team which security bosses said would specifically be dealing with the criminals.

Mombasa residents have decried rising insecurity, especially as they approach the December holidays, saying they fear for their lives.

In August, at least 13 people were attacked and seriously injured by the gang members in an incident that attracted the attention of Interior Cabinet Secretary Fred Matiang’i.

On a visit to the county, Dr Matiang’i promised of a “painful” war against gangs and drug dealers whom he linked to rising cases of crimes in the region.

For a few weeks, police were seen conducting patrols in a bid to curb attacks, with the county security committee later announcing the arrest of more than 300 suspects.

In January, the minister visited the county and declared “total war” against the gangs only for peace to prevail for a short period and more crimes to follow.