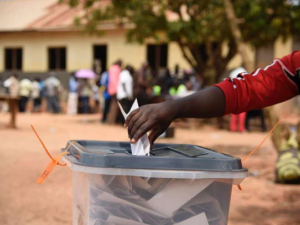 Candidates seeking electoral positions in Uganda’s general election due early next year will have to conduct their campaigns without physical contact as dictated by Covid-19 social and physical distancing, the Electoral Commission has announced.

The commission, which released a new roadmap of electoral activities, has set November 2 and 3, 2020 as nomination dates for Presidential candidates. Those seeking seats in Parliament will be nominated a month earlier on October 12 and 13, 2020.

The chairperson of the Electoral Commission, Justice Simon Byabakama Mugenyi, said at a press conference on Tuesday that no definite dates have been set for the elections. He, however, indicated a general period of between January 10 and February 8, 2021.

“The exact polling date will be set in due course,” Mr Byabakama said. “The Commission has done a risk analysis, the implications and instituted mitigation measures in line with the guidelines issued by the Ministry of Health. We have also considered the need to preserve the health of the Citizens vis-a-vis their constitutional and democratic right to elect leaders of their choice as guaranteed under the Constitution, and come up with a plan that ensures minimal person to person contact during the implementation of the electoral process.”

Mr Byabakama said nomination forms will be available on the commission’s website from where aspirants can print and fill them. He said for areas without access to internet, the commission will provide hard copies. However, candidates will be allowed only two people at the nominations: the nominator and a seconder.

“Mass rallies will not be allowed but campaigns will be conducted mainly through media. The commission will issue specific guidelines for each electoral activity under this revised roadmap in due course and will engage with various stakeholders on the same.”

Article 61(2) of the Constitution provides that the “Electoral Commission shall hold general presidential, parliamentary and local government council elections within the first thirty days of the last ninety days before the expiration of the term of the President.”

Incumbent President Yoweri Museveni was sworn in to office for his current term on May 12, 2016 implying that his term expires on the same date in 2021.

Responding to questions about calls for postponing the election to give all candidates a fair chance in light of the Covid-19 disruption, Mr Byabakama said, “The option of postponing the election has not even occurred to us as a commission because it is not in our mandate. For us we are guided by the Constitution Article 61 Clause 2 and unless that is changed by those who are mandated to, we have to comply,” he said.

Mr Byabakama brushed aside concerns that the circumstances are likely to play to the advantage of the incumbent President Museveni who already has unfettered access to media while his opponents have a history of being blocked by the police.

Mr Byabakama added that the commission’s mandate is limited only to state (public) media which is required to give equal space to all presidential candidates.

Mr Crispin Kaheru, former coordinator of Citizens Coalition for Electoral Democracy in Uganda (CCEDU) said the revised roadmap does not indicate evidence of consultation and participation of the various stakeholders.

Patrick Oboi Amuriat, the President of the main opposition party Forum for Democratic Change (FDC), told The EastAfrican his party and colleagues were taken by surprise by the release of the revised road map. He said they were not consulted.

Mr Oboi added that the road map appears skewed to favour the incumbent.

“This order that campaigns are conducted digitally is meant to favour the incumbent who will, under the guise of security with all the protection, go ahead and violate all these guidelines. In fact, the election of 2021 could turn out the worst in the history of this country.”