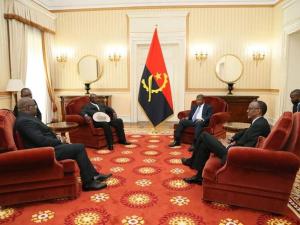 The meeting was set to discuss the insecurity in the region and especially look into Rwanda’s recent public complaints that Uganda arbitrarily arrests its citizens as well as provide support to those engaged in activities destabilizing the country and region.

Rwanda says its citizens continue to languish in Ugandan prisons and safe houses without trial. Uganda denies it. The ongoing crisis prompted Rwanda to advise its citizens not to travel to Uganda, saying their safety is not guaranteed while there.

Speaking at the opening of the quadripartite summit (Angola, DRC, Rwanda and Uganda), which Luanda hosts on Friday, João Lourenço stressed that the meeting aims to outline steps to solve the problems that this sub-region of Africa faces.

“I do not say an immediate solution, but at least in the certainty that many of the problems that this sub-region can be addressed and know better days,” said the Angolan Head of State at the meeting, which ends today

“As far as the bilateral relations between the republic of Rwanda and the republic of Uganda are concerned, the summit welcomed the willingness of the two parties to continue a dialogue with a view to finding a solution to the existing problem,” a communiqué released after a quadripartite summit between Presidents Paul Kagame of Rwanda, Yoweri Museveni of Uganda, Félix Tshisekedi of DR Congo and their host President João Lourenço, reads the communiqué published after the meeting.