Another Rwandan dies mysteriously in Uganda 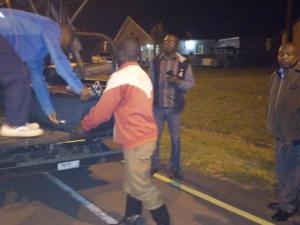 Ugandan officials on the night of Thursday, February 6, handed the body of a Rwandan national killed in Uganda to Rwandan officials at Cyanika border post.

The victim, identified as Semukanya Gasore, died in mysterious circumstances, according to Ugandan officials who delivered the body to the border.

The Ugandan delegation said his lifeless body was on Tuesday found hanging from a tree in Kyuya forest, Rugeshi sub-county in Kisoro District.

Kisoro shares a common border with Rwanda’s Burera District where the deceased hails from.

The body was transported to the Rwandan border in a Uganda Police pickup.

Gasore, 36, was working as a casual labourer in Uganda and would return to Rwanda periodically to visit his family.

The Ugandan team that brought the body was led by an official who declined to identify himself to both the Rwandan officials and media but sources said he's the commandant of Kisoro Police Station.

Also present were the deceased’s family and friends.

Speaking to the media shortly after the body was offloaded, the Ugandan head of delegation said they got to know about the death of the Rwandan national through information from Ugandan citizens in the area where the body was discovered.

“Yesterday we received information that somebody was hanging on a rope from a tree in Kyuya forest, so the police had to go and visit the scene, we removed the body and took it to Kisoro Hospital mortuary for a post-mortem,” he said.

A copy of the post-mortem report seen by The New Times shows the cause of death as strangulation by rope.

The report also shows that the deceased had internal injuries and “internal hemorrhage on the neck”.

The body was subsequently transported by a Rwandan ambulance to Ruhengeri Referral Hospital for another post-mortem.

Vincent Iyamuremye, the deceased’s brother, urged both governments to investigate the circumstances under which his brother died.

This comes just days after the leaders of the two countries met again in Luanda, Angola and agreed on steps to restore bilateral relations.

This is at least the second Rwandan killed in Uganda in just over a month.

On December 31, 2019 Félicien Mbonabakeka, a 35-year-old Rwandan father of four, was killed by a group of villagers in Uganda before he was hurriedly buried by the police in the neighbouring country.

News of Mbonabakeka’s cold blood murder was broken to his family by another Rwandan, Emmanuel Nsabimana, who escaped what he described as a violent attack against Rwanda nationals by a gang in Uganda’s south-western district of Kisoro.