Atwoli: Ruto will be president if he stops calling me ‘mzee wa nyororo’ 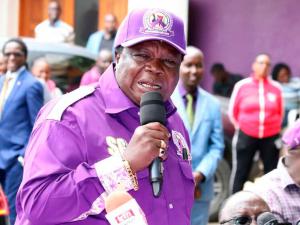 The Central Organization of Trade Unions (Cotu) Secretary General Francis Atwoli has said Deputy President William Ruto will only become the president of Kenya, once he ceases calling him ‘mzee wa nyororo’.

The firebrand trade unionist also said that should the DP one day seek his support to become the president of Kenya, he wouldn’t hesitate to help him.
“He is a very good leader… he is a shrewd, what he is lacking are good advisors… I will advise him correctly on how to become a president and I swear he will become one. But if he still calls me mzee ile ya nyororo he will continue struggling with his problems,” Atwoli said.

Mr Atwoli also disclosed that when the DP was facing criminal charges at the International Criminal Court (ICC) at the Hague, he gifted him a rosary.
“If he (Ruto) is not careful, Raila (Odinga) will hand over this government to Martha Karua and she will become the president of the Republic of Kenya,” Atwoli said.