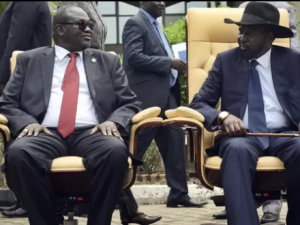 Johannesburg – The African Union’s Peace and Security Commissioner Smail Chergui has told South Sudan’s recalcitrant government and the main opposition group, under the respective leaderships of President Salva Kiir and Dr Riek Machar, that they have a “last chance” to form a national unity government following months of prevarication in settling their outstanding differences and as the US warns of punitive steps against both sides.

"This maybe is the last chance for them to respond to the will of their people. South Sudanese are tired of war," the Sudan Tribune quoted Chergui as saying during a meeting with United States officials in Washington.

Washington has also expressed frustration with the situation and assistant secretary of state for African affairs Tibor Nagy warned that the US had a lot of “tools” available and would not hesitate to use them if South Sudan’s warring parties failed to form a transitional national unity government by next year.

The meeting in Washington was held after Kiir and Machar agreed yet again to delay implementation of the unity government by another 100 days until both sides agreed to key benchmarks as outlined in a revitalised peace agreement signed in September last year.

The implementation had originally been delayed in May for six months to November 12 after Kiir’s Sudan People’s Liberation Movement (SPLM) government and Machar’s SPLM-In Opposition failed to agree on the unification of their forces, the number of states and their demarcation.