Battered in Uganda, Uzabumwana Succumbs to His Injuries 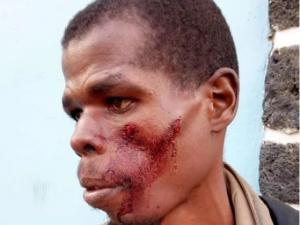 A Rwandan citizen who was recently beaten by unknown people in Uganda has succumbed to the injuries sustained from the flogging by a group of people.

On Monday, emotions were high as Dieudonné Uzabumwana, 30, who hails from Cyanika Sector, Burera district, was laid to rest in his ancestral home.

He died after being assaulted by unknown men inside Uganda and dropped at the Rwandan border by Uganda People’s Defence Force (UPDF) personnel in Kisoro District, South Western Uganda.

The Governor of Northern Province Jean Marie Vianney Gatabazi confirmed on Monday night that Uzabumwana died after being beaten inside Uganda. He had been living in Kyankwanzi District in Central Uganda since October 2016 until earlier this month when he decided to return home.

On January 20, Uzabumwana was dropped off at Cyanika border by UPDF men, bearing physical signs of assault and bleeding from his injuries. He was immediately admitted in Cyanika Health Centre.

“Upon realising that he was in critical condition, he was transferred to Ruhengeri Referral Hospital where he succumbed to his injuries on January 26,” the official said.

Governor Gatabazi said that the deceased had gone to Uganda through legal borders and with proper documents but he decided to return to Rwanda earlier this month. He took a Jaguar Bus up to Kisoro district from where he got a motorbike to transport him to Cyanika border.

On his way to Cyanika, at a place known as Ngangi, several Kilometres to the border, he was intercepted by 3 people who took him into a nearby bush and beat him to pulp, taking everything he had on him, including money.

“He was badly assaulted. His attackers exhibited high levels of violence, hitting him with a stone on the head which probably led to his demise because he bled profusely from the injury,”

“He did not recognise any of his attackers but he said they were all Ugandans,” Gatabazi said.

Uzabumwana was laid to rest on January 27, 2020 at his birthplace in Cyanika. Governor Gatabazi condemned acts of violence meted out against Rwandans in Uganda.

The death has led to Rwandans on social media petitioning President Yoweri Museveni to ensure safety of Rwandans who legally enter the Uganda and releasing those languishing in jails.

Rwanda maintains that hundreds of Rwandans remain incarcerated in Uganda on trumped up allegations without being granted justice or the right to return home. Last month Ugandan released 9 Rwandans who had been held in Uganda for many years, triggering a feeling of hope that Kampala was eventually releasing Rwandans detained in Uganda.

Rwanda says Kampala has to show commitment to released Rwandans and ensuring their safety and at the same time stop backing armed groups fighting the government of Rwanda in order for the relations to fully normalise.

According to Rwanda’s State Minister of Foreign Affairs in charge of the East African Community, Amb. Olivier Nduhungirehe, the two countries are looking to follow through on further implementation of the Luanda Memorandum of Understanding but no dates in sight yet.