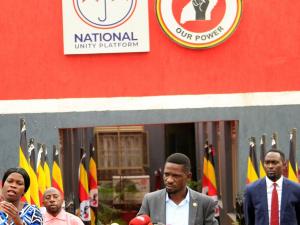 “We are withdrawing from the courts but we are not opting for violence. We are withdrawing the case from Mr Owiny Dollo's court,” Wine, who has accused some judges of the court of being biased, said as he announced the withdrawal of his petition.

The move comes a day after President Museveni, the electoral commission and the Attorney-General filed their 185 affidavits in response to the 53 grounds that the National Unity Platform (NUP) legal team had raised to prove that the election was rigged, and wasn't free and fair.

On Sunday, lawyers of the ruling National Resistance Movement (NRM) said Wine will face heavy financial implications if he withdraws the petition.

Mr Oscar Kihika, director of the NRM legal department, told journalists at the weekend that the party will ask Wine to pay all the expenses the party incurred in responding to the  petition.

“I hope his lawyers are advising him about this action of his because there are specific provisions to be considered. They should realise it is not a simple thing,” Mr Kihika said at the NRM party secretariat's offices in Kampala.

“This decision cannot be taken lightly. Obviously if he withdraws, he can rest assured that as lawyers for the respondents, we shall go after Hon Kyagulanyi for the costs. That is sure,” he said, terming Wine's remarks "casual".

The Daily Monitor revealed that Wine was mulling withdrawing or carrying on with the petition.

Chief Justice Alfonse Owiny-Dollo and two justices of the Supreme Court last week refused to recuse themselves from hearing the petition as Wine had requested.

In a telephone interview, Mr Anthony Wameli, one of Wine's lawyers, revealed that his client will be willing and ready to cover the said costs.

“That is a given; [that] once a matter is withdrawn, there are costs one is expected to pay. I don’t think my client has a problem paying. My client is aware of it,” Mr Wameli said.

Mr Joel Ssenyonyi, the NUP spokesman, said, "We are not worried about the costs because ultimately, we have been paying the price ever since we decided to challenge President Museveni. Look at how many lives we have lost. What is more expensive than life?"