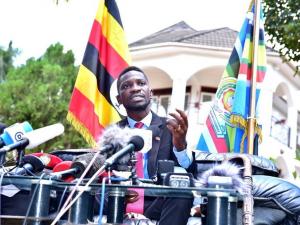 "On behalf of the people of Uganda, I am challenging you (Museveni) to a free and fair election in 2021," the singer, whose real name is Robert Kyagulanyi, said on Wednesday at an event in the capital, Kampala.

We shall address the press today at 10am at Magere. All efforts to get a different venue have been frustrated by security agencies intimidating all the venue owners and ordering them not to host any of our functions. We shall overcome.

He was wearing a red tie and his signature red beret, which he has called a "symbol of resistance", a look copied by dozens of his supporters at the event, which came more than a week after saying in an interview that he planned to contest the election.

The 36-year-old has emerged as a leading critic of 74-year-old Museveni, striking a chord with young Ugandans with his songs about social justice.

One of Bobi Wine's songs has the lyric "Freedom fighters become dictators", while others hint that Museveni, who plans to seek a sixth term as the president, has stayed in power too long.

He has faced repeated arrests while authorities have frustrated his efforts to perform.

Bobi Wine first came to prominence in 2017 when, as an independent candidate, he won an election to represent a constituency near Kampala.

He has since successfully campaigned for other opposition candidates, raising his profile as a national leader and attracting calls urging him to run for president.

But Bobi Wine faces multiple challenges, including limited opportunities to hold rallies or stage concerts ahead of elections.

He was most recently arrested in April for allegedly staging an illegal protest last year - charges fellow opposition MPs decried as ridiculous - but was released from jail after a few days.

He is also facing treason charges after being arrested with 30 other opposition politicians in August last year for allegedly stoning Museveni's convoy following a campaign rally.

He accused security forces of torturing and beating him while in custody - which authorities denied.

"We came to the conclusion that we as a generation must challenge President Museveni," Bobi Wine told Al Jazeera.

"We are not going to wait for anybody else, but we ourselves [will do this]. Right now, as we speak, we are resolved to challenge president Museveni, and my team believes that I can best represent our generation in this cause," he added.

Earlier this year, Uganda's Supreme Court upheld a decision to remove an age cap of 75 for presidential contenders, paving the way for Museveni to run again in 2021.