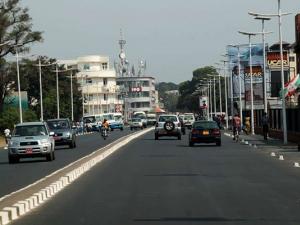 Burundian capital Bujumbura is under ‘curfew’ on the order of the city’s mayor, Freddy Mbonimpa, indicated in a letter dated November 21.

The mayor has restricted time for all bars in the city over security.

The agenda of the closed door meeting, also attended by security and government officials, was the status of the country’s security ahead of next year’s general election.

In his letter, the mayor states; “The opening hours of bars and other drinking places is strictly from 5pm to 9pm during weekdays and from 1pm to 9pm on weekends and public holidays.”

The same letter also banned street vendors in and around the city with immediate effect. Local administrators and police commissioners are expected to implement the order.

Early last month, a group of unknown armed assailants shot dead three people and wounded three others in a bar in the city centre.

Below is a full list of what the mayor ordered:

1. From now on, bars will be open from 5pm and close at 9pm on working days and from 1pm to 9pm on holidays and weekends.

2. Joint security committees must be set up in places where there are none and existing ones must be strengthened.

3. The household notebooks [books where family members in a home are listed for local administration officials to keep record of who is in the home] must be regularly checked.

5. Every city resident must clean the front of his/her home.

6. At least two lamp posts [and lamps] must be installed in each home and lit.

8. Street vending of phone airtime is strictly forbidden in Bujumbura.

10. All parts of [damaged] cars must be cleared off the streets.

11. Owners of the restaurants must install spotlights to keep their premises lit.

12. Owners of restaurants must hire at least two security guards.

13. Rubble and sand should be cleared from the streets.