Burundi refugees in Tanzania to return home from Thursday - official 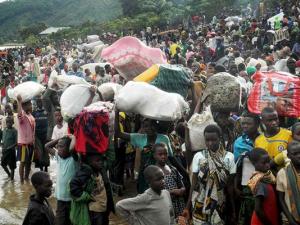 Burundi said on Tuesday that a first group of its refugees in Tanzania would return home on Thursday, as a mass repatriation planned by the two governments begins, a Burundian official told Reuters.

About 1,000 refugees are in the first group, Nestor Bimenyimana, the Burundi government’s general manager for repatriation, said. He said the process was “voluntary”.

Burundi and Tanzania agreed in August that repatriations of 200,000 Burundi refugees in Tanzania would start on October 1, sparking fears of forced returns among some of those who crossed the border to escape violence.

Tanzania’s home affairs ministry spokesman said on Tuesday that only the minister could speak and he was not immediately available.

Hundreds of Burundians have been killed in clashes with security forces since 2015, when President Pierre Nkurunziza ran for a third, disputed term in office. Over the same period, more than 400,000 have fled abroad, predominantly to Tanzania, Rwanda and Democratic Republic of Congo.

The United Nations and rights groups have said they fear the governments may force the refugees to return home to a dangerous environment where they face political persecution.

After the announcement in August, Reuters spoke to refugees in camps who said there was no way they would be safe back at home.

“At this stage, things are not conductive for mass returns,” said Babar Baloch, a spokesman for the U.N. refugee agency (UNHCR) in Geneva, said by phone on Tuesday.

He did not comment on the Burundian official’s remarks, but said refugees must “make a decision for themselves if the situation is right for them to return or not”. He said that those that felt safe had already gone home, while people continue to leave Burundi because of problems they face there.

UN investigators wrote in a report last month that Burundi was at risk of a new wave of atrocities as it approaches a 2020 election with an unresolved political crisis and a president increasingly portrayed as a “divine” ruler.

Bimenyimana, the Burundian official, said that 15,000 of his country’s refugees were living “illegally” in Tanzanian camps, without giving details.

He said “forced” repatriation of that group was likely: “We don’t know when, it’s up to Tanzania to decide when to drive them back. We are ready to receive them on our territory.”