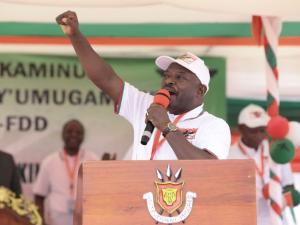 Members of the National Assembly have analyzed and approved a draft bill governing the ranking of President Pierre Nkurunziza as a ‘Guide of Patriotism’ despite controversial discussions, this 19 February.

Aimée Laurentine Kanyana, Minister of Justice who defended the draft bill in the National Assembly has said the latter has been recommended by law-makers who noticed a special and ideal reference of President Pierre Nkurunziza to patriotic matters, social cohesion and national wisdom.

During the plenary sessions, MPs have raised their concerns. MP Bernard Ndayisenga asked the main motives behind this ranking. As for MP Fabien Banciryanino, the establishment of the draft bill by a twelve-team commission wouldn’t be attributed to all MPs. In addition, he said President Pierre Nkurunziza wouldn’t be considered as a guide of patriotism as many cases of human rights violations were committed in his 15-year term in office. “There are also many refugees in exile while others live in dire conditions. Nothing should be considered to rank him as a Guide of Patriotism,” he said.

MP Simon Bizimungu has said the national day established in July coincides with other national days and should have a negative impact on the state economy. In addition, the day will be chaired by the supreme guide. “How will two presidents chair the same activity,” he wondered. Pascal Nyabenda, Speaker of the National Assembly said the establishment of the draft bill complies with the law. “Even any MP can also suggest a draft bill in accordance with the law,” he said.

MP Ibrahim Uwizeye, however, has said MPs should congratulate the commission that established the draft bill. “This is a good example to follow. In addition, the president elevation should inspire other presidents to achieve tangible results so that Burundians may appreciate their efforts,” he said.

The same view is made by MP Gélase Ndabirabe. He said MPs are from different political parties and their thoughts are based on their political beliefs. “Their opinions or viewpoints will change nothing in the approval of the draft bill,” he said. MP Godelieve Nininahazwe added that President Pierre Nkurunziza has strongly defended national sovereignty. “Remember when the whole international community was against Burundi in 2015, the President strongly defended the country and didn’t betray Burundians,” she said.

Minister Aimée Laurentine Kanyana said the establishment of the draft bill complies with the law. “All procedures have been respected,” she said. She also explained that the way the President strongly defended national sovereignty was among the motives behind this elevation. “He succeeded tin governing the country without any foreign support and Burundi is now a peaceful country thanks to his efforts,” she said adding that all perpetrators involved in different crimes were arrested and brought to justice. “None was killed,” she said.

The Minister said President Pierre Nkurunziza achieved so many tangible results in all sectors of the country that he deserves to be ranked as a “Guide of Patriotism”. Out of 108 MPs present in the National Assembly, 91 voted for the draft bill, 3 were against and 14 abstentions