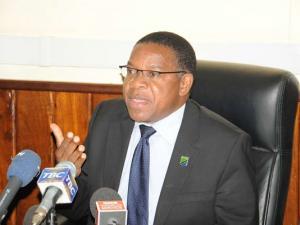 Former Tanzanian Foreign Minister and diplomat Bernard Membe has been expelled from Tanzania’s ruling Chama Cha Mapinduzi (CCM), after he was accused of indiscipline and violating the party's ethics and constitution.

Mr Membe, who had sought the ruling party’s nomination for presidency in 2015, was kicked out on Friday by the Central Committee (CC).

Earlier this month, he was interrogated for five hours by the Ethics Committee at the party’s headquarters in Dodoma.

Mr Membe was a Foreign Affairs minister when Jakaya Kikwete was president.

They were accused of running conspiracy campaigns against the CCM chairman, President John Magufuli, and against the party as the succession race heats up. President Magufuli is seeking to remain party leader.

In its ruling Friday afternoon, the CC, under the chairmanship of President Magufuli, issued a warning to Mr Kinana then put him under 18 months’ watch. The CC pardoned Mr Makamba unconditionally.