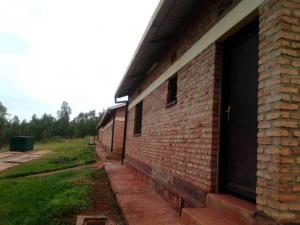 In 2010, a local government development agency sent contractors to a small town in eastern Rwanda to set up a waste management project. Years later, a ghost structure remains unused, and nobody has answers as to what exactly happened.

The project, located in rural Ngoma district, entailed setting up a garbage dumping site with an adjacent facility equipped to turn the waste into briquettes. These briquettes were to aid in the government’s plan to help local communities move away from cutting trees for firewood and charcoal.

The Local Administrative Entities Development Agency (LODA), implemented the project, according to recollections from different local officials from the region.

Today, abandoned locked buildings stand at the site around Ruhinga hill in Kibungo sector, about 10km from Ngoma town. The rural town sits on the highway from the Rwanda-Tanzania border.

Information as to the use of the facility is not uniform. Three former officials we interviewed, who preferred anonymity, said LODA brought the project without consulting local officials on it’s feasibility. As a result, there was no waste to turn into briquettes, leaving the facility idle.

In addition, it was after construction was complete that contractors determined it needed a water pumping station. National power utility switched off electricity to the site in 2016, according to one official.

One of our sources, who was on the Ngoma district Council, told Izuba Radio reporter that progress reports about the project from the district mayor suddenly stopped around 2014.

There is so much confusion about the project that different offices at the district have different budget figures. One office has documents that read hundreds of millions, another document in another office has total budget as Rwf 38m.

The current district Mayor Nambaje Aphrodise, for his part said the documents he has show the project cost was Rwf 127m.

“Even though the planners didn’t exhaustively think about what the project would need like water supply, at least a dump site was established. Today, our town has a designated site for garbage,” said the mayor.

He said a new private company had been awarded a contract beginning July 18, 2020, to collect garbage around Ngoma and deliver to the site. The same company would also start making briquettes from the machines at the site, added Mayor Nambaje.

It took our reporter more than three months trying to piece together information from current and former officials. Some couldn’t remember, as others said they didn’t know. Those with some sketchy information said they were no longer working in Ngoma and didn’t want to get involved.

Such is the fate of an endless list of projects around Rwanda whose fate is unknown. From annual reports of the Auditor General, projects worth billions are years behind schedule, abandoned or were never implemented.

For example, in the 2018-2019 national audit report submitted to Parliament in early May, the Auditor General Obadia Biraro said a total of 65 contracts valued at Rwf 107,939,885,720 ($113m) have been reported as either delayed or abandoned.