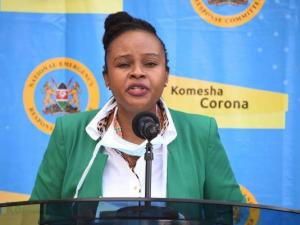 Seventeen more people in Kenya have tested positive for the coronavirus, raising the country's total number of confirmed cases to 320.

The Health ministry announced this in its daily update on Thursday, saying all the new patients were Kenyans.

Dr Mercy Mwangangi, the Chief Administrative Secretary (CAS) in the ministry, said Mombasa County accounted for 12 of the cases and Nairobi County five.

Dr Mwangangi said 15 of the patients were found through surveillance and that two were in quarantine facilities.

Nine of the new patients were male and eight female, all between 22 and 60 years old.

The CAS said the 17 people were among 668 tested for the Covid-19 in the last 24 hours and that Nairobi still accounted for the bulk of samples, with a total of 478.

The ministry further reported that the number of recoveries in Kenya had risen to 89 as six more patients had been discharged after testing negative for the disease.

It also said that only two patients were in intensive care units and that the rest of the cases were mild.

The ministry noted that with focus on curbing local transmission of the virus, the public must continue adhering to the government's guidelines, the basic ones being social distancing and maintaining high standards of hygiene.

Dr Mwangangi noted, however, that while hand sanitisers are effective, soap and water are advisable.

She also addressed the matter of stigma, saying contracting the coronavirus is not a crime

"Quarantine is not detention. It is for the public good and those quarantined must not be stigmatised," she said.

"Quarantine remains an approach taken the world over. It has been impactful ... we are working to improve the facilities."

While noting concerns about asymptomatic people, the ministry explained that they can transmit the virus, whose incubation period is between one and 14 days, the average being five to six days.

Dr Mwangangi further warned operators of passenger service vehicles against returning to normalcy, saying they risked punishment by the government.

Dr Patrick Amoth, the acting Director-General in the ministry, reiterated this and added that those who escaped from quarantine would face the government's wrath.

The coronavirus was first reported in Wuhan, China, on December 31, 2019.

Since then, it has quickly spread across the world and infected at least 2,658,764 people, according to Worldometer's tally on April 23.

Worldometer's count showed that the number of closed cases was 915,421, with 80 per cent or 729,982 being the number of recoveries or those discharged.