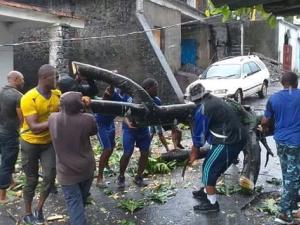 Residents in Tanzania and Mozambique are bracing for the touchdown of Cyclone Kenneth - which is barrelling towards land with winds of 205km/h (125mph) and torrential rain.

Communities in the southern Tanzanian region of Mtwara and in northern Mozambique are being warned to seek higher ground and shelter.UN officials say they fear it could mean a "humanitarian catastrophe".

Authorities in the region ordered schools and businesses closed to ensure the residents’ safety after warning of life-threatening effects the deluge storm will bring.

The order to close schools and workplaces was issued on Wednesday by Mtwara Regional Commissioner Gelasius Byakanwa.

Meanwhile, the Tanzania Meteorological Agency (TMA) said the storm would make landfall in Tanzania and Mozambique on Thursday night.

The agency told journalists on Wednesday that the storm had been spotted in the north western parts of Madagascar, which is about 600km from the coast of Tanzania’s Mtwara region and was travelling at 160km/hr.

Earlier this week, AccuWeather, an American media company that provides commercial weather forecasting services, said the cyclone is likely to hit Lindi and Mtwara regions of Tanzania and Pemba in Mozambique this week.

The amount of rainfall expected, AccuWeather said, can result in life-threatening flooding and lead to homes being inundated by floodwaters.

“If this depression becomes the next organised tropical cyclone in the South-West Indian Ocean, it would be given the name Kenneth,” said AccuWeather.

TMA acting Director-General Pascal Waniha said the cyclone is expected to be 450 kilometers from Mtwara travelling at a wind speed of 130km/hr.

“During the night, tropical storm Kenneth is expected to be 250km from Mtwara, travelling at an estimated speed of 150km/hr,” Dr Wahina said.

Last month, Cyclone Idai caused hundreds of deaths in the region. More than 900 people died when the storm brought devastation to Mozambique, Malawi and Zimbabwe.