D-Day as Kenyans cast their votes in general election 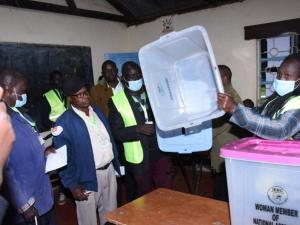 It’s D-Day in Kenya in what is expected to be a tightly contested presidential election as Deputy President William Ruto faces veteran opposition politician Raila Odinga.
Dr Ruto, deputised by Mathira MP Rigathi Gachagua, is making his first stab at the top seat and hopes to rise against all odds to capture the presidency.
He has weathered many political storms that have seen a majority of his allies purged by the ruling party Jubilee from various parliamentary positions after falling out with President Uhuru Kenyatta, who has placed his bet on Mr Odinga and his running mate Martha Karua of the Azimio la Umoja coalition.

Mr Odinga is on his fifth, and likely final stab at the highest office in the land after unsuccessful attempts in 1997, 2007, 2013 and 2017.
Final opinion polls before the elections released last week placed Mr Odinga ahead of Dr Ruto, but the DP has dismissed the numbers as fake.

Other candidates in the race to State House are Roots party candidate George Wajackoyah and running mate Justina Wambui, who have premised their campaigns on legalisation of cannabis, and Mr David Mwaure Waihiga deputised by Ruth Mucheru on the Agano Party ticket.
The two, however, hardly register a blip on any opinion polls, leaving it a two-horse race between Dr Ruto and Mr Odinga.

22,120,458 voters
Some 22,120,458 voters spread across the 290 constituencies and 46,229 polling centres are registered to vote in an election that has seen the highest number of candidates since independence.
Four presidential candidates is the smallest number since the return of the multiparty system in 1992, but there are a record 2,132 aspirants eyeing the 290 National Assembly seats and another 12,994 seeking the 1,450 County Assembly (MCA) positions.

Some 340 candidates have been cleared to vie for 47 Senate seats, with 266 seeking gubernatorial positions in the 47 counties, and another 359 eyeing the 47 Woman Representative seats in the National Assembly.
Meanwhile, the Independent Electoral and Boundaries Commission (IEBC) in the run up to the polls suspended elections in four MCA seats following the deaths of candidates.

Today’s elections follow intense campaigns featuring the two front runners for the presidency going hammer and tongs at each other.
The transitional election is vital as it ushers in a new era, with President Kenyatta concluding his second and final term, but unlike his predecessor Mwai Kibaki, he is heavily rooting for his preferred candidate, Mr Odinga, much to the chagrin of the Ruto camp.
https://www.thecitizen.co.tz/tanzania/news/d-day-as-kenyans-cast-their-v...