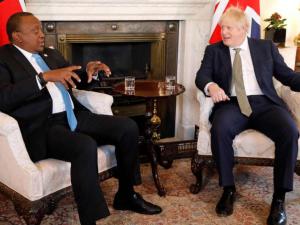 Kenya is racing against time to sign a post-Brexit trade deal with the UK, as ideological differences among EAC member states threaten to derail negotiations for a collective trade agreement.

With only four months to the December 31 expiry of the current trade arrangement, in which EAC partner states enjoy duty-free and quota-free access to the lucrative UK market, Kenya is starting to lose patience with the slow pace of negotiations at the regional trade bloc level, The EastAfrican has learned.

As a Lower Middle-Income country, Kenya stands to lose the most if the EAC does not sign a collective post-Brexit trade deal with the UK, as its exports will become subject to taxes and other restrictions.

The other EAC member states, which are classified as Least Developed Countries (LDCs), will continue to enjoy unrestricted access to the British market.

Kenya and Rwanda were seeking to be allowed to negotiate bilateral deals with the UK that will allow in EAC partners wanting to join later; the proposal was opposed by Uganda.

“A decision, which includes options of the application of variable geometry, will be reached in the coming days,” said Kenya’s Trade Permanent Secretary Johnson Weru in an interview with The EastAfrican.

Variable geometry, in global trade terms, refers to a situation in which member countries of a regional trade bloc enter into trade agreements as individuals rather than as a group.

Kenya is by far EAC’s biggest trade partner with the UK, having exported goods worth $393 million last year against imports of $349 million.

Kenya’s frustrations were heightened last week after Tanzania, Burundi and South Sudan skipped a preparatory negotiation meeting between the EAC and the UK, making it difficult to chart a way forward.

The EAC is supposed to have signed a draft agreement by the end of September, which is now looking more unlikely after the initial meeting last week was downgraded to “consultative talks” rather than a decisive, agenda-setting forum.

Member states could not agree on the September timeline that Kenya is supporting, terming it as being too short.

The available timetable requires intense talks within the next five weeks, after which a draft agreement reached by negotiators is submitted to each EAC partner states for approval.

A proposal by the UK, seen by The EastAfrican, shows that Britain has proposed the same type of duty-free and quota-free privileges to goods from the EAC, with safeguards and flexible rules of origin similar to those under the current European Union agreement.

London proposes the existing EU-EAC agreement to be the basis for negotiations, saying that “deviating substantially would require a new mandate and could take many years”.

Opponents of the timetable, like Uganda, want talks to continue until December this year. Kampala says that will allow sufficient time to discuss the pros and cons of the new deal, but Nairobi argues that the extended deadline will not allow room for national debates because the transitional period ends on December 31.

Britain, which voted to exit the EU in 2016, formally left the bloc in January this year. A transitional period of one year means that all previous trade deals it signed with Kenya, through the EU, will continue until the transitional period is over.

State House spokesperson Kanze Dena-Moraro, at the time, said the talks would happen within the confines of the EAC integration.

“The negotiations will be conducted within the Kenya-UK Strategic Partnership Framework established by the two leaders in January 2020 and the East African Community parameters in order to enhance regional integration,” she said.

Mr Weru told The EastAfrican that technical teams from EAC member states have held several meetings since January that have generated proposals on the way forward.

With time running out, Nairobi may be forced to take “an aggressive stance at the EAC talks to secure interests of Kenyan producers, wary that a repeat of the failed EPA process must not be allowed,” an official told The EastAfrican while requesting anonymity.

Nairobi, the official said, doesn’t want to face the same fate as happened during the failed Economic Partnership Agreement (EPA) talks in which the EU negotiated with trade blocs in Africa and the Caribbean.

A UK government spokesperson based at the Nairobi High Commission said  that Britain will negotiate with the EAC as a bloc, which London says will improve trade with the region.

“Such an agreement would provide long-term duty and quota free access for all EAC countries, including Kenya as a Lower-Middle Income country, and other EAC countries when they graduate to this level as their economies grow. It would send an important message to investors in East Africa,” the spokesperson said, adding  that the UK is encouraging EAC member states to agree on how to negotiate jointly.

This week, the EAC director general of Customs and Trade, Kenneth Bagamuhunda, said talks for a trade deal were continuing, but did not offer details on the status of the negotiations.

Kenya’s fears is that it could lose the most as it is the only one that is technically the Lower Middle Income country.

Kenya seeks to replicate the same benefits that EAC countries got under the EU, the feeling in Nairobi is that the exemptions under LDC have contributed to the lethargy in negotiations.

Last year, the UK signed an economic partnership agreement with the Southern African Customs Union and Mozambique. The British government said the agreement will allow free trade after the UK leaves the European Union.

That agreement means exporters in South Africa, Botswana, Lesotho, Namibia, eSwatini and Mozambique could continue to trade on preferential terms with the UK, after the transitional period.