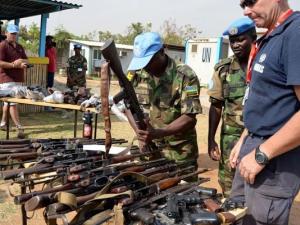 The South Sudan arms embargo ends on May 31 but investigations on the ongoing disarmament, demobilisation and rehabilitation reveal that it has been violated by arms companies since it was imposed in July 2018.

An investigation by Amnesty International revealed that all armed groups in South Sudan have received arms and spares that were not on the ground when the embargo was imposed.

“Renewing the embargo on South Sudan is a crucial part of the efforts against violation because weapons have been used to commit horrific human rights violations and war crimes throughout the conflict,” said Deprose Muchena, Amnesty International’s director for East and Southern Africa.

Earlier this year, investigators gained access to 12 military training and cantonment sites across the country run by members of formerly opposed forces.

There was evidence of newly imported small arms and ammunition, concealment of weapons, and diversion of armoured vehicles for military use not approved under the arms transfer licences.

While these weapons are not newly manufactured, it is reasonable to believe they are newly shipped to South Sudan, which would constitute a violation of the UN arms embargo.

The investigators discovered that by the time of the embargo in July 2018, the South Sudan government’s fleet of Mi-24 attack helicopters was dysfunctional and grounded.

Since then it has acquired spare parts to refurbish the helicopters, violating the embargo.

A single attack helicopter costs $36 million, and parts and maintenance come at a premium, particularly when these components violate a UN arms embargo. Any provision of spare parts to maintain these helicopters would constitute a violation of the arms embargo.

Ukraine is signatory to the Arms Trade Treaty, and is bound not to undermine the treaty’s object and purpose, including “contributing to international and regional peace, security and stability”.

China claims it has not sold arms or ammunition to South Sudan since September 2014, after the civil war broke out saying it would be “inappropriate.”

Amnesty International says that if the NSS acquired the ammunition directly from China, then either the Chinese government broke the arms embargo or sold the arms despite pledging not to.

The resolution supporting the arms embargo legally obliges all UN member states to prevent the direct or indirect supply, sale or transfer of arms and related material — including ammunition, military vehicles and spare parts — from entering South Sudan.

“Given the tremendous challenges facing South Sudan’s grossly underfunded health and social welfare systems — particularly in responding to the Covid-19 pandemic — priority must be given to protecting people's health and livelihoods, rather than purchasing and importing arms,” said the report.

Mr Muchena said that until forces in South Sudan stop concealing weapons, and use the ones they have responsibly, the arms embargo must remain in place to stem the inflow of weapons.

As part of the Revitalised Agreement signed in September 2018, government and opposition forces committed to moving troops to joint cantonment sites, turning in their weapons to independently monitored armoury, and beginning a training process to form unified forces as a step towards building a new military.

However, Amnesty International investigators did not find this disarmament process occurring at any of the 12 sites visited. Some fighters did not bring their weapons to the cantonment sites, as they were wary whether the peace process will hold true.