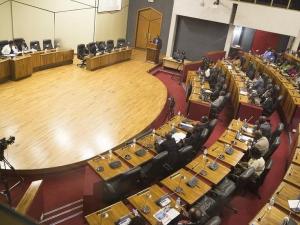 All competent Parliaments keep a transcribed record of everything members say in plenary sessions. The record is called the “Hansard” and, in the age of technology, this information is openly accessible online for those interested in viewing it. There is absolutely no requirement to access it by the public. It is through this record that the public can know what members of parliament say in the August House and verify whether or not they represent their interests.

As a record of parliamentary debate, the Hansard is important for accountability and transparency since it allows the citizens to know what parliamentarians debate and agree or disagree in their name.

In Rwanda, however, the Hansard isn’t a freely available document to the public nor is it made available to journalists on request as the 2013 access to information law requires.

The Chronicles learnt about this after making repeated requests to different parliamentary officials to allow it access this record without success – with each office contacted sending our reporter to another office and the cycle repeating itself. On Friday, October 11, last week, The Chronicles established that not even the Speaker, Donatille Mukabalisa, whose voice mediates Parliamentary debate, has the authority to grant access to the Hansard. The person with that authority is said to be the Clerk.

But when our reporter contacted the Clerk, he was sent back to the Speaker. The Hansard is a parliamentary document, which records all debates in the plenary of parliament. Everything said in the House is recorded and stored for future use.

The Hansard is supposed to be a public document. In nearly all countries with vibrant and democratic parliaments, except for those still embroiled in conflict, the document is published daily or periodically on the parliament’s website.

The Chronicles has since mid-September this year been soliciting to get copy.

Under rules laid out in the access to information law, a law that was passed by the same parliament and signed by President Paul Kagame and published in the national Gazette in March 2013, the Hansard should be accessible either online or parliament’s library or, at least availed on request.

The key principle of the Access to Information Law is emphasized in its article number three which stipulates that every person has the right of access to information in possession of a public organ and some private bodies.

But going by the hurdles that have been put on The Chronicles‘ search for the Hansard, parliamentary staff don’t seem to be bothered that they have obligation to make the Hansard public.

Going from office to office

First, we contacted parliament’s media relations office which is under the Outreach and Documentation Unit in Parliament. We met Maurice Kabandana, since he is the one who usually invites media for parliament activities.

Kabandana said he and others have access to the Hansard after it is signed by the Speaker. It is collected on a quarterly basis.

“When it is already [approved], we do the report and organize a press conference,” he said. However, from our own understanding no such press conference has been conducted.

With the media office not helping, our reporter went to the Central Secretariat of the Chamber of Deputies. This is an office where all documents and information about Parliament is kept. Here, we were told to go back to Kabandana, the media officer, to ask for his help as they said he is the one who deals with the media.

The Chronicles decided that we were not getting help from junior officials and moved up the chain of authority. On October 4, our reporter went to the office of the Speaker. An assistant told us the Speaker was away in a retreat. When we informed her that we needed the Speaker to enable us access the Hansard as other offices couldn’t help, the assistant telephoned another official who we established is Parliament’s Protocol Officer.

The two assistants simply said the Speaker is in Nyagatare district attending a retreat. They did not say anything more.

The Chronicles decided to find the Speaker’s phone contacts to raise the matter with her directly. We contacted her on October 8.

“Go and talk to the Clerk. She is the one who gives out documents and in charge of other things relating to staff and explain which article you want, and what you want to write about”, Speaker Mukabalisa told our reporter.

On Friday October 11, our reporter went to the office of the Deputy Clerk Bernard Bashoga. The full Clerk was unavailable at the time, so we opted for the Deputy.

After hearing we need the Hansard, he posed several questions which were answered. He said he would have to consult with other parliamentary officials. However, he also at that time personally went with our reporter to another office which was unmarked but seemed like a library or store for all parliamentary archives. In this room, there was only a single person who was in charge.

On the table of this official are different documents, including handwritten manuscripts. Some documents are written in names of committees, which means perhaps they are committee reports.

In this office, the Deputy Clerk went into explaining to us what the Hansard is: “Hansard editor originated from Britain in 576, he had a good manuscript and his works are still kept [here] till now”.

The Deputy Clerk showed us a voluminous book which he said was previous copy of the Hansard. Our reporter wasn’t allowed to hold or peruse the book, but could see the date written on it as: “2011-2012”. It seems to be a collection of plenary sessions held for that period.

We put it to the Deputy Clerk that Parliaments of other countries including those in this region put the Hansard online and easily allow the public to access it. He responded: “Before this November, it will be put on our website”.

He explained that the Hansard is not online because it is not secured, adding that they are in the process of creating a security system so that whenever it is put online, no one will be able to edit it. “Leave your email, and I will talk to my superiors to see if we can send it to you,” said Deputy Clerk Bashoga.

Is it the rule or you made it right now, asked our reporter? The female official replied: “It (the Hansard) is parliament property”. They all left.

In Kenya, the Hansard is on parliament’s website published the next day after every plenary. The latest Hansard on the site was for the House debate of October 9. The Kenyan Parliament goes even further, it publishes full video of the session alongside the Hansard in web text format.

The Kenyans have theirs on the front page of the site, so anyone searching for it doesn’t have to navigate looking for the Hansard. It appears immediately you open the site – indication perhaps, that they consider it an absolute public necessity as a tool for accountability.

For the Ugandan Parliament, the Hansard is also on the website, published on a monthly basis. The latest copy is for plenaries which took place in the month of July. Uganda’s Hansard is published as a Word document. It is also on the front-page of the site, making it easy to get it without the trouble of perusing through the site.

In Tanzania, the Hansard is also published daily as a PDF document on parliament website. It is in Swahili language, since this is the official language of Parliament. The latest copy of the Tanzania Hansard is for the plenary of September 13.

However, the Tanzanians have placed theirs in a section of the site called “Parliamentary Business”. Hansards appear number 3 on the drop-down menu. And when you click, the list appears, which you have to download.

In Seychelles, the Parliament’s Hansard is also on the front-page of its website as text. It is published as soon as its transcription is complete. The latest is for the plenary on October 1.

As for Mauritius, the Hansard is placed in the ‘Parliamentary Business’ section of its parliament. After every plenary sitting, the verbatim is published as a PDF format. The same is with Nigeria, South Africa, Australia, US, UK and all EU countries.

Rwanda is a country committed to accountability, transparency and participation of the citizenry in governance, and it’s therefore inexcusable that its parliament limits access to records of its work or doesn’t properly store such important record.