Dialogue between couples, the key solution for a safe family 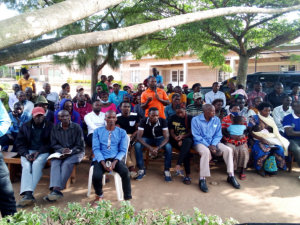 In the past three months, five people have lost their lives in Ruhango district, in Rwanda's southern province, due family conflicts.

A recently released report by National Institute of Statistics of Rwanda shows that nationwide divorce cases filed to court increased by 1900% from 69 in 2017 to 1311 in 2018; 8,941 divorces cases were decided by courts in 2019, up from 1311 that were recorded in 2018 as it was reported by Supreme court that year.

It is an alarming news as experts warn more divorce cases in the coming years due to coronavirus impacts and from children who were born from separated families.

These figures show that the southern province comes second after the city of Kigali where conflicts lead to divorces. Last year in 2021 in the city of Kigali counted 2400-divorce cases while the Southern Province recorded 1989 cases.This has pushed Institut Panos Great Lakes  to orgnize June 12, 2022 a  comunity debate in

This debate organized in partnership with The Rwanda Journalists Association of (ARJ) was broadcasted live in synergy by 13 radios and 2 televisions.

Residents and officials, including Habarurema Valens Mayor of Ruhango District, Kamarampaka Consolee the Provincial Chief Investigator, Rwanda Investigation Bureau (RIB), Nzasabimana Samuel the Head of the Ruhango District Rwanda Investigation Bureau (RIB), Mutabazi Patrick the Executive Secretary of  Byimana Sector and journalists were all together to discuss and find a solution of this issue.

The Mayor of Ruhango District, Habarurema Valens, presented statistics on the current state of domestic violence, where he said that last year's figures, Ruhango District was among the five districts with safety and stability, but also that since March 2022, five people  have lost their lives due to family conflicts

“We have received 700 families that have conflicts but 500 of them have a promising improvement while the rest 100 do not show any positive result in our discussions and conflict resolution process.” He said

goes on to investigate. According to Ms. Consolée, the most common crime in the province is spousal harassment, adding that another crime that the community has not yet identified, namely the use of threatening to death, Consolée Kamaramapaka, urges the citizens to file a complaint when the crime is committed.

Nzasabimana Samuel, the head of the Ruhango district Rwanda Investigation Bureau (RIB), reminded the citizens that according to the constitution, in its article 18, it is stipulated that the family is the foundation of Rwandan society, and that when the family is not safe, the country is not well either. According to the statistics of the last three years in Ruhango district 592 crimes were committed by 657 people, 563 by men and 94 by women, that 202 crimes were related with harassment, 188 crimes committed by men 14 committed by women.

Mutabazi Patrick Executive Secretary of Byimana sector, spoke about the cause of the crimes, which is mainly the financial mismanagement of family assets. He says that when spouses understand the importance of equality in marriage, they will discuss any issues and seek a compromise.

Byimana sector has a recent case where a husband tried to kill his wife and when the later escaped, the man killed their 4 years son and committed suicide.

They mostly pointes some locally produced cheap alcoholic drinks knows as imbutabuta or dunda ubwonko saying that many family disputes that take people’s lives happen when men are drunk.

“One bottle of such beer is 300 Rwanda francs and two are enough to get drunk and lose mind!! The government should be cautious about these drinks and assess their standards” Said one of citizens

They also pointed on village leaders who sometimes fail to report family conflicts and they may result death of one of family members.

The Mayor of Ruhango District, Habarurema Valens argued that there is also a problem a misunderstanding of gender policy which has been mistaught to citizens. He insisted that the conversation between spouses, which is a lasting, remedy to be preferred for the prevention conflicts.

He reminded the citizens of the importance of a resilient and safe community as their district slogan: a clean district, branded with positive mind and hard work without conflict.

After the debate, citizens and leaders relaxed enjoying the music ambiance, citizens were happy to see leaders in their village and suggested that talk show time should be extended to two hours when the debate is decentralized,