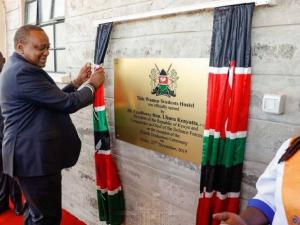 President Uhuru Kenyatta has hit out at politicians opposed to the yet-to-be-released Building Bridges Initiative (BBI) report and urged them to allow Kenyans to debate it without undue influence.

Speaking during the fourth Graduation of Kibabii University, Bungoma county on Friday, Uhuru said he was surprised some politicians are already faulting a yet-to-be-made-public report

“There are some characters who poke holes into the report yet they are not privy to what is contained inside,” he said.

He urged leaders to stop hurling insults at each other over the task force report and instead wait for the report to be made public.

He said as a country there a raft of things we need to get right to build a strong united nation and some of the issues could be addressed through the BBI process.

"Only a fool will say that there are no issues in this country that require addressing."

Uhuru told Kenyans to thoroughly go through the report once they receive it so that we can debate as a country and go for what is good for us.

For More of This and Other Stories, Grab Your Copy of the Standard Newspaper.

“Let us just take time and read through it together and to come out with good things that can make our country even better, more united and that make our institutions more inclusive,” he said.

His remarks come just hours after BBI taskforce announced that the report will be made public on Tuesday when they present it to President Uhuru and ODM leader Raila Odinga.

In a statement to the media, the task force said it completed its task on October 23 and communicated the same to the Office of the President which in turn gave them an appointment slated for Tuesday.

“It is now our privilege to inform the public that an appointment to hand the report to his Excellency the President has been arranged for November 26,” the task force said in the statement.

BBI was the highlight of the 2018 handshake between Uhuru and Raila in the heat of the disputed 2017 General Election that was already degenerating into violence.

It has ignited political debate since its inception with politicians allied to Deputy President William Ruto terming it a plot to block the DP from ascending to power.

President Uhuru and Raila have, however, maintained that the main import of the exercise is to bring unity, cure tribalism and buttress the fight against corruption and not about the 2022 elections.