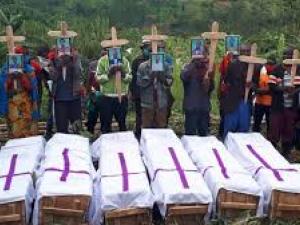 Grief and sorrow engulfed residents of Rumbi Cell, Rusasa Sector in Gakenke District following a sudden death of eight family members who all perished through a landslide on Thursday.

According to accounts by neighbors, the landslide which was characterized by rocks from the hillside crushed the family’s house from Bwanamo Village, killing Théoneste Dusabimana, 46, and head of the family, his spouse and all their six children on spot.

“The landslides which were triggered by heavy rains that pounded our village on Wednesday night hit a house in which the family was sleeping, it was early in the morning on Thursday,” said Patrick Niyomukiza, a neighbour to the family.

He said that neighbours who were already outside tried to rescue this family but in vain “we only managed to retrieve dead bodies.”

“It was a depressing experience given that where the house was located is not what you would consider a high risk zone; it is hard to explain, may their soul rest in eternal peace,” added Niyomukiza with tears shedding on his face.

Speaking to The New Times, Samuel Nsabimana the Cell Executive Secretary noted that it was the first time such an incident occurred in the area.

“Besides the family members, their livestock also died in the mudslide; we identified cattle, goats, pigs and poultry among other livestock. We tried to console with the neighbors as they were apparently in a state of trauma,” he noted.

Nsabimana underscored that some other families whose homes were identified to be prone to landslides were temporarily relocated to local schools to prevent further fatalities.

This family was part of 23 fatalities that Gakenke District recorded during the torrential rains that struck the district and the rest of the country on Wednesday night.

Speaking to The New Times around midday on Friday, the district mayor Déogratias Nzamwita noted that district officials were set to join Rumbi Cell residents for the burial function of the perished family scheduled to take place on Friday afternoon.

Nzamwita noted that besides fatalities, seven residents were currently at various health facilities nursing injuries associated with the landslides.

He assured that the district was working closely with the Rwanda Red Cross to avail humanitarian assistance to those who have been relocated to various schools from across the country following the torrential rains.

Gakenke District recorded a total of 577 houses that were cracked down by the heavy rains.

Countrywide, at least 72 people have been confirmed to have been killed by disasters associated with the Wednesday night downpour, according to the Ministry of Emergency Management.

Besides the lives lost, the rain destroyed public infrastructure including roads like the Kigali-Musanze road which was temporarily blocked on Thursday morning but was late cleared and traffic resumed a few hours later.