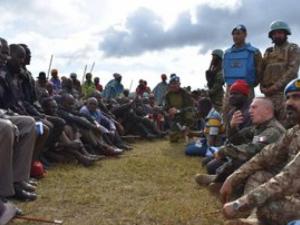 The ongoing violence in DR Congo’s eastern region of Minembwe and surrounding areas is part of systematic decades-long hostilities against Banyamulenge and other Rwandofone communities in the neighbouring country, several experts and activists have said.

Speaking on a live talk-show on Rwanda Television Sunday night, two Rwandan researchers and an evangelical preacher of Banyamulenge descent, and a US-based Congolese activist said the latest cycle of attacks against the ethnic group involve a myriad of foreign negative forces which has worsened the situation.

“Unlike previously, a host of other local communities have come together and formed an alliance with the objective of driving the Banyamulenge out of their ancestral homes, take away their possessions and, or kill them,” said Dr Aggee Shyaka, a Senior Lecturer/Researcher at the Centre for Conflict Management of University of Rwanda.

As with the three other guests on the show, hosted by RTV’s Basile Uwimana, Shyaka hails from the Banyamulenge community in DR Congo’s South Kivu Province.

He traced the origins of Banyamulenge’s troubled history to the 1885 Berlin Conference which partitioned Africa, putting members of the same community either side of newly formed border in the process.

This is how the Banyamulenge pastoral lands – originally part of Rwanda – ended up on foreign territory known today as DR Congo, he said.

Hundreds of Banyamulenge have so far lost their lives in the latest cycle of violence which started in 2017, while the community has also lost an estimated 100,000 cows to Mai-Mai militia groups and their allied irregular armies from neighbouring countries, the experts said.

They said the latest violence is more devastating than previous episodes of attacks because Mai-Mai militia groups from rival local tribes such as the Abafurero, Ababembe, and Abanyintu have since joined hands with armed groups from neighbouring groups.

Among the foreign negative groups involved in this ‘coalition’, they said, is the FDLR militia largely blamed for the 1994 Genocide against the Tutsi in Rwanda.

They also cited several Burundian armed groups in the violence.

Paul Kayira, an Assistant Fellow Research, said the ongoing violence is not an inter-ethnic conflict but rather a coordinated effort at eliminating a particular group of people.

“What’s going on is basically genocide,” he said, drawing parallels with the killings that rocked Rwanda from April-July in 1994 that claimed the lives of more than a million people.

Most of the perpetrators of the 1994 Genocide against the Tutsi would subsequently cross over the border into then Zaire (now DR Congo), along with hundreds of thousands of refugees.

The overwhelming majority of the refugees and perpetrators have since returned home but some extremists remain holed up in pockets of DR Congo, where they have not only committed crimes but have also spread genocide ideology among local communities, particularly targeting Tutsi populations.

Kayira insisted that the violence targeted at the Banyamulenge community has partially been fuelled by the Interahamwe militia that crossed into the Congo after committing genocide in Rwanda.

However, he said, seeds of animosity against the Banyamulenge were first sown by the Belgian colonialists and nurtured by post-independence regimes, including Mobutu Sese Seko’s.

Successive governments have done little to ensure respect for Banyamulenge rights, including social acceptance of land ownership, he said, adding that the Banyamulenge had lived in their current localities in DR Congo for more than 400 years before the arrival of colonialists in late 1880s.

He noted that as many as 174 Banyamulenge villages have been burnt down in Uvila, Fizi and Minembwe over the last two years, with thousands of survivors forced to move into squalid camps for Internally Displaced Persons.

As many as 45,000 IDPs are in dire need of urgent humanitarian assistance, Dr Shyaka said.

“It is clear there is a ‘deal’ that involves many players to uproot the Banyamulenge from their ancestral home,” said Tito Rwagitinywa, a historian and evangelist.

He said, while the Congolese government has its own limitations, it has done little to confront the perpetrators.

‘Left on their own’

He observed that the Banyamulenge had tried to put up resistance in self-defence but were increasingly being overwhelmed by the sheer number of the attackers.

“They have been left on their own,” Rwagitinywa said, adding that Banyamulenge politicians in the capital Kinshasa and officers in the Congolese army (mostly deployed elsewhere in the vast country) have had little impact on the ground.

Contributing to the one-hour long show via Skype, US-based Jean Paul Ruhosha, Executive Director of Congo Today, an NGO he said is involved in promotion of justice and economic development, criticised the United Nations for standing idly by as his people were being slaughtered.

“Is Never-Again applied selectively?” he posed in reference to the United Nations’ slogan first used 1960s to underline the world’s commitment to prevention of genocide and mass atrocities.

The slogan has in most cases been rendered irrelevant as millions have since been killed because of their identity. The case in point is Rwanda in 1994 when a UN force based in the country was not only ordered to not intervene to prevent or stop the killings but was in fact scaled down, leaving many at the mercy of their eventual killers.

The slaughter only ended when the then Paul Kagame-led Rwanda Patriotic Army (RPA) liberators marched across the country seizing power in July, three months after the killings had begun.

Banyamulenge, Rwagitinywa said, are being killed in close proximity of Monusco (the UN Mission in DR Congo), the UN’s largest and most expensive peacekeeping force.

“They continue to stand idly by as people are being killed.”

They called on Rwanda to leverage its influence in the region and beyond to advocate for the Banyamulenge.

“Rwanda has a record of fighting genocide at home and abroad and we believe it can come to the rescue of Banyamulenge in one way or another, especially through advocacy,” said Dr Shyaka.

He pointed at the growing ties between Kigali and Kinshasa as a welcome development. “I wish this collaboration could grow faster and result into more concrete action to deal with insecurity challenges that face eastern DR Congo.”

The panellists also dispelled claims that Rwanda could be behind the ongoing violence against the Banyamulenge, saying it is a diversionary narrative promoted by anti-Rwanda groups and those bent on annihilating the Banyamulenge.

Rwanda has always stood with the Banyamulenge and with anyone threatened by the spectre of mass slaughter or genocide, said Kayira.

He cited cases where the Rwandan army has previously come to the rescue of the Banyamulenge, including in Katanga, and in South Kivu, in 1996, when they had been given an ultimatum of one week to leave the area.

Rwanda is also home to tens of thousands of Banyamulenge refugees who first arrived in the country from the Congo about two decades ago.

According to Shyaka, the latest wave of violence against the Banyamulenge, is part of a longstanding campaign that targets Rwandofones in Congo, and involves those behind 1994 Genocide against the Tutsi in Rwanda – which was stopped by the current Rwandan government.

He said the violence follows a pattern that includes the 2004 slaughter of more than 160 Banyamulenge at a refugee camp in Burundi and other previous cycles of massacres targeting Congolese Tutsi communities.

“Those are diversionary tactics,” Shyaka said, suggesting that the originators of the narrative could be trying to pre-empt possible Rwanda’s intervention to stop the massacres.

The experts appealed to the Rwandan government to use all possible means, including its cardinal ties with the Congolese government and regional frameworks such as the International Conference on the Great Lakes Region (ICGLR, which brings together DR Congo and all of its neighbours), to bring the violence to an end.

A December 2018 UN Report of Experts on the Congo cited P5, an amalgamation of five anti-Kigali groups, among foreign negative forces with bases in Minembwe.

The report named Uganda and Burundi as main source of P5 recruits and supplies.

Many P5 fighters – mostly from fugitive Kayumba Nyamwasa’s RNC – were earlier this year killed or captured by Congolese forces, FARDC, around the same region.

Those captured were later transferred to Kigali where they are on trial.