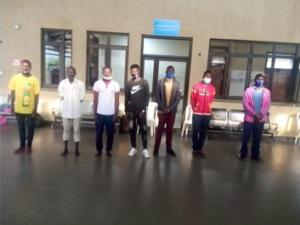 Fifteen Rwandans have been deported from Uganda following days of illegal detention in the country. The deportees arrived in Rwanda on Wednesday 15th September 2021 through Kagitumba border in Nyagatare district.

Some of deportees revealed that they were arrested by Uganda’s military and tortured on accusation of illegal entry to the country.

Cyprien Maniriho,28, hailing from Kabaya village, Nkamira cell, Kimonyi sector of Musanze district said that he has crossed to Uganda in 2018 through Cyanika border.

He was arrested in August 2021 by Ugandan soldiers in Mbarara heading back to Rwanda.

Maniriho was first detained in Makenke for one day and later taken to a detention facility in Mbarara.

He was accused of illegal entry to Uganda and spent 21 days in detention.

Bosco Nyandwi is another deportee who went to Uganda in 2018 to run business in Sambya district.

As Nyandwi explained, he was arrested on 19th August 2021 on his way to Kampala.

Nyandwi was first detained in Mbarara on the same accusation of entering the country illegally.

Their deportation follows series of circumstances under which Ugandan officials have been dumping Rwandans at borders following days of torture in detention facilities accused of being spies yet they had traveled to Uganda to run businesses or visit relatives among other reasons.

Recently on 8th September 2021, Rwanda received 16 nationals evicted from Uganda through Cyanika border in Burera district after enduring torture and dispossession of their valuables.

Rwanda, Uganda relations worsened since 2017. Rwanda has been expressing concerns over Rwandans who travel to Uganda for business purposes but are abducted, imprisoned and tortured accused of being spies.

Rwanda also accuses Uganda of hosting dissidents that are posing a threat to national security.

In March 2019, the Government of Rwanda officially advised citizens not to travel to Uganda for their security following testimonies of over 1000 Rwandans tortured and deported from Uganda.

In August 2019, President Yoweri Museveni of Uganda and his Rwandan counterpart, Paul Kagame signed memorandum of understanding ‘Luanda Agreement’ in a bid to solve conflicts between both countries.

Despite efforts to sign the agreement between both heads of state witnessed by mediators including the President of Angola, Joao Lourenço and Felix Tshisekedi of the Democratic Republic of Congo (DRC), the situation is still worsening as Uganda’s Chieftaincy of Military Intelligence continues with arbitrary detention of Rwandans who are subjected to torture in its facilities.
http://en.igihe.com/news/article/fifteen-more-rwandans-expelled-from-uganda