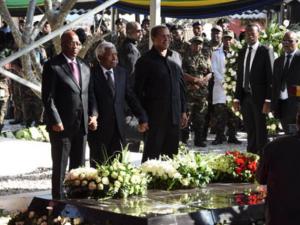 Former president Benjamin Mkapa has been laid to rest in his home village of Lupaso, 30km from Masasi town in southern Tanzania.

Presiding over the funeral service, Bishop Gervas Nyaisonga, the President of Tanzania Episcopal Conference (TEC), said the late Mkapa was a fervent Catholic who led the church’s students’ movement in Makerere University in Uganda, where he was enrolled in 1962 for a Bachelor of Arts degree in English.

The prelate read a condolence message from Vatican in which Pope Francis applauded Mkapa for his contribution to education and development in Tanzania.

Bishop Nyaisonga urged Tanzanians to uphold national unity and to shun segregation of any kind.

Mourners began arriving at the Mkapa residence as early as 5am on Wednesday before proceeding to the church for the requiem.

Mr Kikwete, who took over from Mkapa, said he was a close friend and an advisor during his presidency. He added that Mkapa was the architect of Vision 2025, which envisaged Tanzania to become a middle-income economy with an average income of $3,000.

Mzee Mwinyi said his successor was a no-nonsense leader who took his work seriously. He asked Tanzanians to forgive him for whatever he transgressed during his leadership “because he was a human being”.