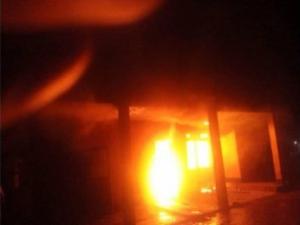 The two buildings including a shop and grocery store belong to Theoneste Bigirimana and Youssouf Nsabimana.

Residents around tried to put out the fire but their efforts remained futile until police intervened with firefighting truck.

Witnesses have commended Rwanda National Police (RNP) for timely dispatching firefighters who succesfully put out the fire before spreading to other buildings.

“ It was an intense fire outbreak that started from the shop of Bigirimana and spread to neighboring grocery store of Youssouf. Residents tried to put it out in vain until police intervened. All nearby houses would have burnt had it not been immediate response,” said Fidele Uwizeye.

The value of destroyed items has not yet been confirmed.
http://en.igihe.com/news/article/fire-guts-two-commercial-buildings-in-b...