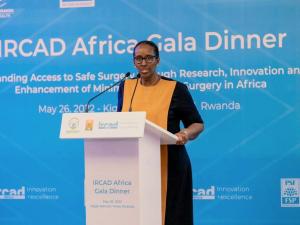 First Lady Jeannette Kagame has urged the private sector and other partners to work together to support safe and affordable access to expert surgical treatments, for all Africans.

She made that call on Thursday, May 26 during a fundraising gala dinner for the Research Institute against Digestive Cancer IRCAD Africa.

The dinner at which she was joined by reknowned French surgeon, Dr Jacques Marescaux, aimed at raising more resources for surgical Research and Development, and a Scholarship Fund for gifted surgeons.

IRCAD Africa is the first of its kind on the continent to be open in Rwanda with a commitment to advancing minimally invasive surgeries.

“Every Franc raised by Rwanda and Friends of Rwanda to improve the welfare of our communities will be honoured with a careful, judicious use,” she said.

In addition, she pointed out that no amount of money could reflect the value of a mother with chronic back pain, regaining the ability to play with her child, or a father with heart disease being granted long enough life, to see his grandchildren born, and thriving.

“Becoming a medical hub is for Rwanda an estimable destiny, that we will gladly attain, with the help of Friends of Rwanda and enriching cross-sector partnerships,” she said.

In addition, she said that it is important to put the hearts, as well as resources together to support IRCAD Africa in its noble mission.

She further highlighted the importance of minimally-invasive surgery;

“It serves as a safer, more precise, and less burdening means of conducting a variety of surgeries, many of which are life-changing, life-saving, or critically time-saving,” she said.

She said that it reduces the risk of surgical procedures while maximizing their effectiveness, and diminishes the devastating powers of a multitude of diseases that eat at the lives of millions of adults and children every year.

In addition, she revealed that access to medical tourism on the African continent, is for some, being granted a second chance at a healthy life, that sometimes involves costly visa applications and lengthy flights.

She also talked about the importance of supporting IRCAD.

“The expert training of our doctors and engineers is a stepping stone, to the state-of-the-art medical systems, that we are determined to develop,” she said.

The First Lady said that they are looking forward to witnessing IRCAD Africa, and its promising impact on the progress of surgical medicine on the continent.

She also commended the progress of the construction of the IRCAD Africa Centre’s new home in Masaka, a construction led by the Government of Rwanda, in support of this fantastic enterprise.

IRCAD Africa has the goal of making minimally invasive surgery in Africa accessible and sustainable as well as investing in research and development of affordable instruments and techniques to assist surgeons, interventional radiologists, and gastroenterologists.

The amount contributed will fund to sponsor 12 engineers working on minimally invasive surgery projects and train around 150 surgeons at IRCAD Africa this year.

The event was attended by various people from the private sector along with top government officials.