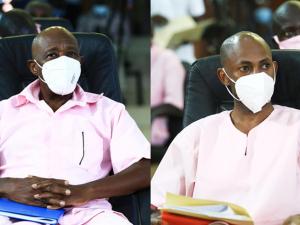 Court has adjourned to Friday, February 26, the case in which individuals suspected of committing a string of terror acts in Rwanda, to allow judges time to deliberate on a jurisdictional objection presented by one of the 21 suspects.

The case was held on Wednesday, February 17, by a three-person bench of the High Court Chamber for International and Cross-Border Crimes at the main trial chamber of the Supreme Court.

The high court chamber ordinarily sits in Nyanza District but they used the Supreme Court premises to be able to accommodate all parties in the case including civil parties seeking reparations.

Before the trial started, one of the suspects, Paul Rusesabagina, said that the court did not have jurisdiction to try him, saying that he was a Belgian citizen who had renounced his Rwandan citizenship.

Rusesabagina, who was flanked by his lawyer Gatera Gashabana, asked to be sent back to Belgium where he can be tried, saying that Rwandan prosecution had already referred his case to their Belgian counterparts who had already started investigations.

However, prosecution, which was led by Deputy Prosecutor General Angelique Habyarimana, said that being Belgian does not strip Rwandan courts of the powers to try him, as long as he committed crimes on Rwandan territory,

The prosecutors further challenged Rusesabagina to produce evidence where he legally discarded the Rwandan nationality, which is considered his citizenship of origin. Rusesabagina did not present this evidence.

Expounding on the case filed to the Belgian courts, prosecution said that defence appeared not to have read the full indictment against the accused, saying that everything is clear.

“There were two indictments against Rusesabagina; the first one was issued in 2010 and sent to our Belgian counterparts, the second was made in 2018 and for which we issued an international arrest warrant against the suspect,” Bonavanture Ruberwa, one of the prosecutors, said.

Prosecution also dismissed claims by Rusesabagina and his lawyer that the latter’s arrest in Rwanda had caused a rift between the judicial authorities in Rwanda and Belgium, saying that on the contrary, their colleagues have been “very helpful” in their investigations.

“When Rusesabagina was arrested, our Prosecutor General wrote to his Belgian counterpart notifying them of the development. They reacted by sending to us the complete file including findings from their own investigations,” said Habyarimana.

“Today we only deliberated on the objection presented by Paul Rusesabagina, we could not proceed before pronouncing ourselves on this objection because it raises concerns of jurisdiction of this court. We will therefore rule on the matter before we can proceed. We will return here on February 26,” ruled the judge.

Meanwhile during the hearing, one of the accused, Callixte Nsabimana, also known as Sankara, challenged Rusesabagina, saying that it was shame that he claims not to be Rwandan, yet he was agitating to be Rwandan president.

“I know Rusesabagina well; I was his vice-president (in MRCD); how can he claim not to be Rwandan yet when we launched the rebel group his aim was to be Rwandan president? Would he be president of a country to which he was not a citizen? I think he is wasting court’s time,” Nsabimana said.

Nsabimana, who said he has been pleading before this court for two years, said that it was only fair that the case is expedited.

Nsabimana, who was the spokesperson of FLN besides being the vice-president of the political outfit MRCD, was arrested in 2018.

Besides the duo, others in the case include Herman Nsengimana, who had replaced Nsabimana as FLN spokesperson, and Angeline Mukandutiye, the sole woman in the group.

Mukandutiye returned to Rwanda after an offensive by the national army of DR Congo routed FLN and other fighters out of their positions in the eastern part of the country.

The case has attracted civil parties, representing 84 individuals who are seeking damages from the group, having been affected by their activities.

The trial, which was streamed live on the judiciary platforms, was attended by diplomats representing various countries.