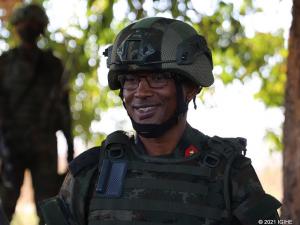 President Paul Kagame and Commander-In-Chief of the Rwanda Defence Force (RDF) has promoted Maj Gen Innocent Kabandana to the rank of Lieutenant General.

He receives the promotion following his tour of duty in Cabo Delgado, of Mozambique.
The statement released by RDF on Monday 26th September 2022 reads that the appointment takes immediate effect.

Rwanda started the deployment of 1000 troops of the Rwanda Defence Force (RDF) and the Rwanda National Police (RNP) to Mozambique on 9th July 2021, to fight terrorist groups, honoring the request of Mozambique. The troops had increased to nearly 2000 by the end of the year 2021.

The situation in the country had worsened since October 2017 when armed extremists launched an insurgency in the Cabo Delgado Province of Mozambique.
Mozambique Defence Armed Forces battled the extremists but many civilians were killed and displaced by the fighting.

Before Rwandan troops’ intervention, terrorists had killed 3000 civilians while more than 800,000 were displaced. The insecurity had also put to halt all development projects in the area controlled by insurgents.

The joint operations between Rwandan and Mozambican troops yielded big where different regions were seized from rebels.
Rwanda and Mozambique have been enjoying vibrant relations for many years.

Lt Gen Kabandana who has been commanding the Rwandan JTF was recently replaced by Maj Gen Eugene Nkubito.
During his tour of duty, Lt Gen Kabandana was deputized by Brig Gen Pascal Muhizi who served as joint operations commander.
Lt Gen Kabandana once served as Defence Attache’ to the Embassy of Rwanda, Washington DC.

Among others, he held different positions as a Brigade staff officer in charge of Civil Military Affairs, Chief Instructor at Rwanda Military Academy in Gako, and Deputy Chief Military Personnel Officer in the United Nations Mission in South Sudan -UNMISS Sudan.

He was also once the Chairman of the Military Tender Board : Chief of Logistics, RDF HQ ; Commandant of Rwanda Military Academy and Director of Rwanda Peace Academy.
https://en.igihe.com/news/article/former-joint-task-force-commander-of-r...