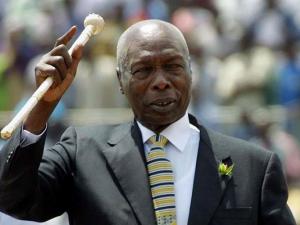 Daniel arap Moi, a former schoolteacher who became Kenya’s longest-serving president, has died. He was 95.

Moi’s death was announced by President Uhuru Kenyatta in a statement on the state broadcaster on Tuesday.

“It is with profound sadness and sorrow that I announce the passing of a Great African Statesman, H.E Daniel Toroitich arap Moi, the second president of the Republic of Kenya,” President Kenyatta said in the Proclamation, “the former president passed on at the Nairobi Hospital on the early morning of 4th February 2020, in the presence of his family.”

Born on September 2, 1924, Moi first served as Vice President for fourteen years, before taking over as an Acting President on August 22, 1978, following the death of President Jomo Kenyatta, who ascended to the presidency in 1964 after serving as Kenya’s inaugural Prime Minister when the country gained independence in 1963.

Moi’s ascension to power was in accordance with a constitutional provision that mandated the Vice President to govern for ninety days in the event the seat of the President fell vacant.

He later was declared substantive President in September 1978 after a special cabinet meeting endorsed him for the November 8, 1978 poll.

The new leader of the then ruling Kenya African National Union (KANU) had delayed naming a new cabinet following the death of Kenyatta, promising to follow in the footsteps of the founding father.

“I’ve said several times that I don’t intend to make major changes in the administration of the country and that I am going to follow the policies laid down by our late father of the nation. I have decided to wait for wananchi’s verdict in the forthcoming general election before I make a major cabinet reshuffle,” he said in a televised address a month after assuming office on an acting capacity.

Moi had ventured into politics in 1955 following his election as member of the Rift Valley Legislative Council, replacing John ole Tameno.

He later served as Education Minister in the pre-independence government (1960 – 1961).

A founding member of the Kenya African Democratic Union (KADU), Moi alongside co-founder Ronald Ngala joined the governing KANU after the party was disbanded.

He served as Home Affairs Minister before taking over as Vice President in 1967 when Joseph Murumbi who had hardly been on the job for five-months tendered his resignation.

Murumbi had taken over from Jaramogi Oginga Odinga who resigned over ideological differences with Kenyatta.

Moi’s 24-year rule was characterized by clamour for a constitutional amendment to allow for multi-party politics which was abolished in 1982 under his rule.

During his presidency, Moi held a number of regional portfolios including Chairperson of the Organization of African Unity (presently African Union) between June 24, 1981 and June 6, 1983.

Moi – father to eight children – was married to Lena, who faded from the public scene in 1970s, a few years before her husband succeeded President Kenyatta.

His son Gideon succeeded him as Baringo Central Member of Parliament and was later elected Senator for Baringo in 2013.

Moi and Lena divorced in 1979. She died in 2004 and was buried at the retired president’s Kabimoi home despite having separated.