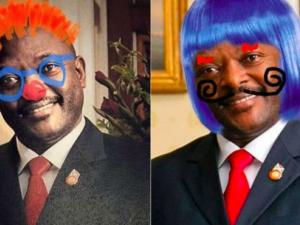 Twitter users have rallied to the cause of three schoolgirls arrested for defacing photos of Burundian President Pierre Nkurunziza by following their example.

Crudely doctored images of the leader are being circulated online under the hashtag, #FreeOurGirls. The girls were charged last week with insulting the head of state and could spend up to five years in prison.

Burundian authorities are routinely accused of cracking down on human rights and dissent.

The schoolgirls, aged 15,16 and 17, were arrested two weeks ago after the president's image was defaced in textbooks. Four other students arrested with them were later released.

Here are some of the images that have been circulating online in support of the girls.

The father of one of the detained girls told campaign group Human Rights Watch that they were too scared to eat.

HRW has urged the government to release the schoolgirls and concentrate on curbing abuses by the security forces.

"Authorities should focus on holding perpetrators of serious rights violations to account instead of jailing schoolchildren for doodles, the group's Central Africa director, Lewis Mudge, said.

In a similar case in 2016, several schoolchildren were imprisoned and hundreds expelled for scribbling on images of the president's face.