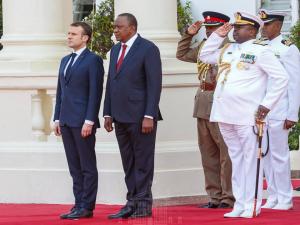 French President Emmanuel Macron arrived in Nairobi on Wednesday in his final tour of three African countries. He arrived at Jomo Kenyatta International Airport shortly after 2 pm and drove straight to the State House where he received a 21-gun salute before inspecting a guard of honor.

This is the first time a French president has been plowing Kenyan soil for a state visit since independence 56 years ago.

Macron and his host President Uhuru Kenyatta then retreated to a closed-door meeting for bilateral talks, which is to touch on different issues among them beefing up trade ties.

Via Twitter, President Kenyatta said, "I am delighted to host my friend H.E. President Emmanuel Macron of France at State House Nairobi, in his historic visit to Kenya. Kenya and France enjoy a cordial relationship that has helped spur growth in different areas for the benefit of our people."

President Macron is expected to sign a series of agreements with Mr Kenyatta as Paris eyes reasserting its influence in the eastern Africa region.

Mr Kenyatta will also seek France’s commitment in the fight against terrorism, specifically on whether it can support the African Union Mission in Somalia (Amisom). Kenya sent troops of the Kenya Defense Forces to Somalia in 2011 to help restore peace and stability.

On Thursday, Mr Macron will attend the One Planet Summit in Nairobi on reversing climate change.

President Macron has toured several African countries in a bid to counter China, whose influence continues to grow.

He has visited Djibouti and Ethiopia where he held discussions with President Ismail Omar Guelleh and Prime Minister Abiy Ahmed.