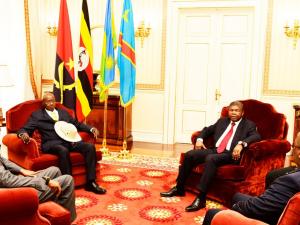 President Paul Kagame and his Ugandan counterpart Yoweri Museveni, will hold another round of talks in three weeks time, at the Katuna border post, as they continue to seek ways of resolving sticking issues between the two sides.

The resolution was one of five that the Heads of State arrived at on  Sunday 2nd February 2020 during the third round of talks in Luanda, Angola.

Dubbed the Quadripartite Summit, the talks are facilitated by Angola’s President Joao Lourenço, and DRC’s Felix Tshisekedi. Before the summit, two others were held in July and August last year in same location.

Las week summit saw the four Heads of State hold an over four-hour closed door session at the Angolan Presidential Palace in the heart of Luanda.

President Lourenco, who briefed the media on behalf of the other Presidents, noted that unlike the last summit that involved signing memoranda of understanding, this time round there were no such documents.

Instead, he invited his country’s Foreign Relations Minister Manuel Domingos Augusto to read a communiqué containing five points agreed upon by the summit.

The meeting, according to the communiqué, resolved that both countries release duly identified nationals who are in detention of the other country, saying the lists had been exchanged between the delegations.

Also, that both countries refrain from conduct that creates the perception of support or financing of “destabilizing forces” in each other’s territory

That each country will respect the human rights of citizens of the other parties and that the Ad Hoc committee that was created to facilitate discussion between the two countries will continue with its work.

Finally, the summit resolved that the heads of state reconvene on February 21 at Rwanda-Uganda known in Rwanda as Gatuna and in Uganda as Katuna.

It remains unclear at this point why Gatuna was chosen, but has plenty of symbolism. On February 28, 2019, Rwanda abruptly closed this particular border, through which most of the Rwanda-Uganda traffic passes.

Hundreds of trucks carrying millions of dollars of cargo from Uganda were told to go back and enter via the Kagitumba border, more than 150km away. Rwanda said at the time the closure was temporary to allow for due construction works to be completed.

But the closure opened a can of diplomatic and geopolitical worms that have seen Uganda’s economy lose hundreds of millions of dollars in lost export revenue from Rwanda. For Rwanda’s part, the economic impact has not been made public, but ordinary people have seen prices of many essential items go up by over 40%. Some products have simply gone off the shelves.

Rwanda, particularly President Kagame has publicly detailed his concerns several times, and different local and international fora. On the other hand however, Uganda’s Museveni has denied there is any “fundamental difference”. Instead, Museveni has also refused to discuss the issue in the media and also barred all his government officials not to comment.

Uganda’s troubles with Rwanda have instead been widely published in obscure website, including allegations of espionage and backing Uganda’s opposition.