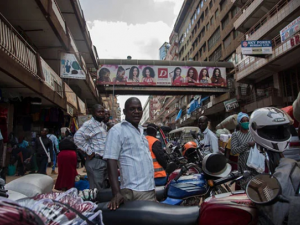 In normal times, the Old Taxi Park is a maelstrom of minibuses, touts, hawkers and passengers at the heart of Kampala, the Ugandan capital.

But today it is a barren sweep of stones and earth, boarded off to all except construction crews and their heavy-duty machines.

The Kampala Capital City Authority (KCCA) has used the country's coronavirus lockdown to begin a long-awaited redevelopment of the park, including the installation of shelters, lighting and a tarmac surface.

It is the most visible plank in a raft of reforms which the KCCA hopes will finally bring order to Kampala's chaotic roads—and which transport workers fear will push them out of business.

Before the pandemic, "there were so many silos within the government," said Jacob Byamukama, head of roads management and transport at the KCCA.

"Covid has brought all of us together, to speak in one voice. It's forcing us to be organised."

Most people get around Kampala by squeezing into 14-seater shared taxis or perching on the back of "boda-boda" motorbikes.

In March, the government shut down public transport to contain the spread of the new coronavirus, which has infected more than 800 people, according to the Ugandan government.

As the lockdown began to ease this month, minibus taxis were allowed back on the streets, but must operate half-full, and boda-bodas are currently only permitted to carry cargo, such as food deliveries.

Now the KCCA and the transport ministry are trying to organise and formalise the sector as the first step towards redesigning the city around bus rapid transit and light rail, in line with a master plan finalised in 2018.

Byamukama said that change is necessary in a fast-growing metropolis like Kampala, with a population that the UN projects will more than double in size over the next 15 years.

Commuters already lose a total of 24,000 hours a day sitting in traffic jams, according to estimates by the KCCA. "If we remain like this, the whole city will grind to a halt," Byamukama said.

But Brian Kirevu, a taxi driver, said he thinks the KCCA is pushing ahead too quickly with reforms at a time when the lockdown has left many people hungry.

"They don't know the challenges we face," he said, sitting at the wheel of his minibus. "Right now they're trying to use this corona thing because most of the people are out of the city."

A report released this month by the Britain-based Global Labour Institute (GLI) estimated that plans for a bus rapid transit system could threaten more than 17,000 taxi jobs and 20,000 boda-boda jobs in Kampala's central business district.

The authorities abandoned a previous attempt to register boda-bodas in 2013 after angry riders beat up registration officials, and the taxi industry has had little oversight since 2018, when President Yoweri Museveni suspended the collection of fees from taxis.

Over the last month, the KCCA and transport ministry have registered more than 13,000 taxis and assigned designated routes along which they can operate, according to Byamukama.

Previously, drivers arriving from out-of-town destinations in the morning would earn extra money by plying unofficial city routes during the day.

As for boda-bodas, the KCCA plans to permanently ban them from carrying passengers within the city centre, with the aim of reducing congestion, pollution and accidents.

Byamukama said the city also wants boda-bodas to register with digital companies such as SafeBoda, a private firm with an Uber-like app and a growing fleet of orange-vested riders.

Some riders have expressed worries that the cut SafeBoda and similar companies take from their fares—which are already lower than they would normally charge—will result in lower incomes.

SafeBoda counters that riders pick up more passengers through its app than they do on their own, meaning they will bring in more money overall.

The proposal for a boda-free zone worries Wilson Lubega, who has been ferrying customers around the city on his bike for 12 years.

"I think it will be the end of the boda-boda because we can't get work outside the city (centre)," he said.

While there are no official figures on the number of boda-boda riders in Uganda, officials and industry leaders estimate at least 200,000 operate in Kampala alone.

If the riders lose work due to the new regulations, most of them will struggle to find new jobs, he added.

Transport has long been a contentious political issue in Uganda, and the topic has come to the fore in the run-up to elections scheduled for next year.

Last week, opposition leaders announced a new alliance while standing in front of a banner that prominently featured images of a taxi and a boda-boda.

"The regime, which has always viewed (transport operators) as a threat, is taking advantage of the lockdown to expunge them out of Kampala and therefore out of employment," the group said in a statement to the press.

Those fears are misplaced, said Byamukama of the KCCA. "We are not leaving out anyone. We want them to be organised," he said.

But John Mark Mwanika, program officer at the Amalgamated Transport and General Workers' Union and one of the researchers behind the GLI report, warned against trying to use the lockdown to rush reform.

That sentiment was echoed by Moses Mawejje Birungi, a spokesman for the Kampala Operational Taxi Stages Association, one of two rival taxi groups.

He has been driving taxis since 1974 and says drivers just want to be heard.