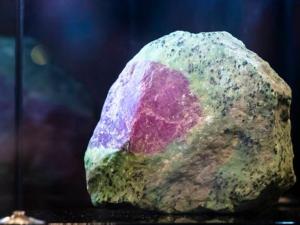 Dar es Salaam. A gold and diamond collection company, which is at the centre of the debate regarding a $120 million (about Sh276 billion) ruby from Tanzania, on Thursday detailed how the precious stone left the country more than 10 years ago.

The firm’s explanation came on the day the Tanzanian government said it was yet to ascertain the true origin of the 2.8kg variegated ruby, said to be one of the world’s biggest, which went on display for the first time ahead of an auction in the Gulf emirate of Dubai.

The 8,400-carat stone – nicknamed Burj Alhamal – was unveiled on April 15 at Waldorf Astoria DIFC as part of SJ Gold and Diamond’s Callisto collection.

In an email sent to The Citizen the company said the purplish-red rough ruby was mined by a local mining company in Winza, Tanzania, which then sold it to an American owner.

Without mentioning the identity of the collector who has put it up for auction, the company said the ruby was purchased at a private sale in the US by the client who is a billionaire collector.

“Ten years ago a local mining company in Tanzania landed on this unique gemstone and sold it to someone in the US. The current owner bought it at a private sale and that is how it got here,” read part of the email.

According to SJ Gold & Diamond Trading DMCC, Tanzania, as the country of origin of the ruby, will reap “huge” benefits from the auction.

“The money raised during the auction will be given under the management to the Tanzania Government for infrastructure development for the artisanal mining community,” said the company.

According to the collector, the ‘Tanzanian’ stone was “not heated”, meaning “it has not been treated, so it’s natural and that’s why it’s precious” with reports suggesting it could fetch up to $120 million.

The stone will be on display at different locations in Dubai for the next 30 days before going to auction.

Speaking in Parliament yesterday, Minerals deputy minister Stephen Kiruswa said they learnt of the existence of the ruby on April 13, and then contacted the Tanzanian mission in Dubai, which confirmed that the current owner was an American citizen.

“We are now following up to find out the circumstances under which the gemstone left Tanzania to its current owner,” he said.

Insiders said the company displaying the mineral could have sourced it through other means that remain a subject of investigations.

The Citizen could not independently verify the arguments regarding the authentic source of the ruby which has attracted the attention of pundits in Tanzania since its display was announced almost a week ago.

Pundits have been questioning the true source of the mineral in question, and if the government was informed about its availability or not.

Also being questioned is what Tanzania deserves to get through the sale of the mineral if it was indeed sourced from the country over ten years ago.

According to GIA, rubies were discovered in Winza, Mpwapwa, in Dodoma Region in 2007, By December 2007, about 600 diggers and brokers from various mining areas and gem markets in Tanzania had moved to Winza to work the deposit for ruby and sapphire.

By April 2008, about 5,000 miners were working the deposit. There were numerous brokers on-site, and several buying offices had been set up in the town of Mpwapwa.