How government will fund 2020/21 budget amidst financial constraints 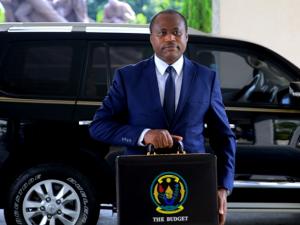 Unlike previous budgets, the 2020/21 budget presented to parliament earlier this week did not specify any new fiscal policies to boost revenue mobilization.

While previous budgets are often analyzed in the context of winners and losers, the recent budget whose implementation will start at the beginning of July, took a different approach.

The thin line walked by Ministry of Finance was mobilizing resources as tax revenue collection targets drop by about 10 per cent to Rwf 1,421.40B (excluding local government taxes) from Rwf1,569.1 billion.

This is the first time since 1998 that the government is projecting a decline in tax revenue.

The Covid-19 pandemic has dented revenue collection notably with a deficit of Rwf45.2 billion in revenue to date mainly due to economic disruption.

Non-tax revenue is also expected to dip by 21 per cent due to lower reimbursements trend from the UN for the cost of peace-keeping as well as a decline in visa fees after removal of such requirement for visitors from some countries.

Total domestic resources including domestic borrowing are set to raise Rwf1,962.8 billion, which is 60.5 per cent of the total budget for the fiscal year 2020/2021.

The government borrows domestically through quarterly treasury bonds of between Rwf5B to Rwf 15B whose subscription has been growing over the years.

The total domestic resources and loans combined account for 84.6 per cent of the entire budget of 2020/2021 fiscal year, which the Minister of Finance Uzziel Ndagijimana said is a good indication of the national objective of self-reliance.

With the drop in tax revenue, the government will have to turn to external loans total to raise Rwf783.4 billion, which is 24.1 per cent of the total budget.

Speaking at a KPMG Budget Analysis session, Richard Tusabe the Minister of State in charge of National Treasury said that currently, Rwanda remains a low-risk country in regard to debt distress.

With the current Present Value of debt standing at 31.2 per cent to GDP.

Tusabe said that the borrowing could see the country move to a moderate debt level.

Among the considerations, he said that will be made during borrowing include prioritization of concessional loans which have lower and fixed interest rates, longer maturity and grace period.

The loans are often from global institutions that Rwanda is signatory to such as World Bank, International Monetary Fund among others.

Tusabe said that to ensure adequate debt management, the proceeds from the loans will go into projects that will create exports, allow import substitution consequently buoying economic growth, job creation among others.

It is this reasoning that will see the government investing Rwf 122B in the agriculture sector going into the construction of radical terraces and progressive terraces, development of irrigation facilities in Gabiro, supporting quality improvement of exported tea, and coffee, Gako beef farm among others.

Tusabe noted that unlike previous budgets, the current budget had little emphasis on taxes but rather expenditure on fundamentals of the economy such as return on expenditure measure in impacts such as jobs created, export values etc.

Angelo Musinguzi a tax expert at KPMG said that there are a few tax administration measures introduced cushioning businesses and individuals against the negative economic impact occasioned by the pandemic.

Some of these measures include revising the non-taxable income threshold of employees working in the sectors most affected by COVID-19 such as tourism and education, extension of time to file returns with Rwanda Revenue Authority and allowing taxpayers to base quarterly tax payments on a current year basis.