I will end corruption in police service, Koome promises 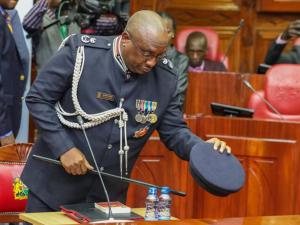 Inspector General of Police nominee Japhet Koome has promised to fight and end the ugly culture of corruption in the National Police Service.

Koome made the pledge when he appeared before the the National Assembly Joint Security Committee on Tuesday. He admitted that corruption is denting the image of the service, while acknowledging that bribery is rampant along the roads, something he promised to deal with if approved.
“I will not sit here to attempt to defend what is happening on our roads,” Koome said.

He added that under his command he will introduce a reward scheme for members of the public who report cases of police officers receiving bribes.
He promised to make it mandatory for all officers on duty to display their tags with at least two names for easy identification. That way, he said, the vice will be a thing of the past.

IG nominee Koome: My net worth is Sh89.9 million
“I intend to engage service commanders to have a reward mechanism to reward members of the public, any member of the public who captures with evidence an officer receiving a bribe. The other strategy anchored in law is that any barrier along the road must be entered in the registry,” Koome said.

According to Koome, 98 per cent of Kenya police force are professional and patriotic.
“I will change the 2 per cent. I’ve just come from Saudia Arabia and every country wanted to know how our police officers handled the Dusit terrorist attack because it was done very professionally.”

4 Rich Kenyan kids who have bagged government appointments
On illicit brew, Koome said that youths must stop liking alcohol, they are drinking too much.
“We must deal with this crisis or else we are going to lose a generation. I will go to the office of the CEO of Nacada and discuss this problem.”

He also described rampant fraud as unfortunate and that it was embarrassing to see educated people falling for this trap.
“When giving evidence to the court, people look at you questioning whether it happened. People need to learn to live within their means, they have no option,” he said.
https://nairobinews.nation.africa/i-will-end-corruption-in-police-servic...