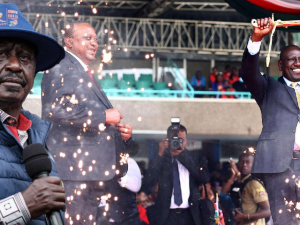 What you need to know:
He said the IEBC division had the potential of plunging the country into a civil war that could have had devastating impact.
The potential for widespread chaos informed his decision to accept the Supreme Court decision, even as he voiced his disagreement.
The possibility of death and bloodshed from post-election violence and fear of International Criminal Court (ICC) charges compelled Azimio leader Raila Odinga to accept President William Ruto’s disputed win.

The Azimio la Umoja One Kenya Coalition party leader, Mr Odinga, on Thursday night poured his heart out to his presidential campaign team, narrating why he let go of his “poll victory” without calling for mass protests.

For the first time since the declaration of the August 9 election outcome and the subsequent ruling by the Supreme Court that affirmed President Ruto’s win, Mr Odinga came out to narrate to the men and women who spearheaded his fifth presidential bid his struggles to build a democratic Kenyan society and how his attempts to clinch the top job have flopped multiple times.

While likening the tense moments after the disputed polls to a similar dispute in Ivory Coast in 2010, the former premier described the split of the IEBC, when four commissioners disowned poll results that were used to declare President Ruto’s win, as a rare occurrence that had the potential to tear apart the country.

He said the IEBC division had the potential of plunging the country into a civil war that could have had devastating impact. The potential for widespread chaos informed his decision to accept the Supreme Court decision, even as he voiced his disagreement.

“That member of the commission was acting on behalf of the then President who had lost the election. The chairman went to a secret location and announced the results then left the country in a quagmire. Close to one million lives were lost. I was appointed by the African Union to go and mediate in that conflict,” recalled Mr Odinga.

He claimed that he won the August 9 polls “by over 60 per cent” but his victory was usurped through the help of the Independent Electoral and Boundaries Commission (IEBC) and the seven Supreme Court judges.

His latest push to initiate reforms at the IEBC and the Judiciary, he said, was not borne out of poll loss bitterness but to ensure a democratic society “even after he is long gone”.

“We won the elections hands down. When history is written the facts will come out. They did not even get 50 per cent,” said Mr Odinga.
“As a member of the Azimio coalition, you should walk tall and feel proud because you are a member of a big movement that won the 2022 election. We know what happened. Kenyans will get to know why we have an illegitimate regime in power. We will continue to illegitimise this regime because they usurped power,” he told his campaign team.

He made the remarks at a dinner organised to thank Azimio la Umoja One Kenya Coalition campaign teams at Safari Park Hotel in Nairobi.
Former President Uhuru Kenyatta, who has kept a low profile since President Ruto took over power on September 13, was expected to attend the night event but did not show up.

One of his close allies who was in attendance told the Saturday Nation that Mr Kenyatta skipped “to avoid creating a perception that he is still in a campaign mood”.
Mr Kenyatta is said to have flown out of the country for holiday after handing over power, but came back last Friday. He is said to be spending most of his time at his Nairobi private residence. A member of President Ruto's team was sent a couple of days ago to meet him for unspecified reasons.

Blame game over Raila Odinga's 2022 presidential election loss
Mr Gbagbo was later captured in 2011 by United Nations forces backed by French troops before he was dragged to the ICC. He was, however, quitted after years of trial.
In 2007, Kenya went through a similar crisis that saw Mr Kenyatta, Dr Ruto, former head of the civil service Francis Muthaura, former police commissioner Hussein Ali, former Tinderet MP Henry Kosgey and Mr Joshua Sang taken to The Hague-based court. All the cases were dropped for lack of evidence.

More than 1,000 people died while thousands others were uprooted from their homes following the controversial declaration of the late President Mwai Kibaki as the winner in a re-election that pitted him against Mr Odinga.
“I spent a lot of time doing that exercise (the Ivory Coast mediation). That is why I have experience in what has happened on the continent. That is why when I make certain decisions, I make them with that background information. The then President, when he was removed from power, found himself at the ICC,” said the veteran politician.

Mr Odinga said that the country had made several gains in strengthening independent institutions, but some of the gains have been rolled back by the same institutions that have resorted to undertaking unconstitutional decisions.

He questioned the Supreme Court ruling, saying that it flew in the face of natural justice. He said it was surprising that the seven apex court judges did not find anything wrong with IEBC chairman Mr Wafula Chebukati announcing results disowned by two-thirds of his commission, and in the absence of the other two.

“Then we take issues to the Supreme Court; the court also agrees that the chairman is not allowed to single-handedly run affairs of the commission but finally says he was right in making the announcement, that in itself speaks volume about the Supreme Court,” stated Raila.
“We need to reform the electoral system; we need to also reform the Judiciary. Not because I feel bitter, it must not be Raila Odinga. I have fought hard for the democratisation of our country and I have paid the price for it but I want when I am gone, I leave behind a democratic society,” he added.

Ms Karua said the coalition will continue to fight for electoral justice by reforming key institutions to prevent scenarios where the loser is the one declared as a winner in an electoral contest.
“You can steal our votes, you can deny us justice but I cannot be your accomplice in your attempt to break my spirit. I will remain who I am and my truth will remain my truth therefore don’t get tired when we say it was stolen,” said Ms Karua.

“When you win legitimately you forget that and you get to work immediately. We shall remain unbroken and we shall continue to serve Kenya because we love our country. We will remain here working to make our home a better place for all of us,” she added.
She told the campaign teams to organise themselves at the grassroots and counties since the coalition was down but not out.

“Aluta continua. We will not let you down; we will be with you every step of the way. We are down but not out, we shall make it. The deferred dream will be actualised and we will sit down and know how,”
Mr Musyoka said the coalition needs leadership to direct its supporters on needed action against the trend of stolen elections.

He said that supporters were now becoming tired of being told that their votes were stolen.
https://www.thecitizen.co.tz/tanzania/news/east-africa-news/icc-factor-m...