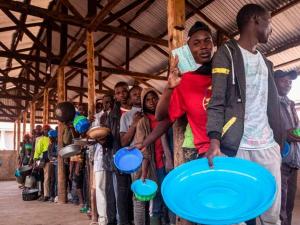 The recent explosion of violence in eastern DR Congo has triggered a new wave of refugees crossing into Uganda, presenting a potential health crisis as the region grapples with a new Covid-19 wave.

More than 62,000 Congolese refugees have entered Uganda since January and the numbers have increased in the past few weeks following renewed fighting between government forces and M23 rebels.

According to the Uganda Red Cross, the majority of the refugees are not vaccinated against Covid-19.

The UN refugee agency protocol is that refugees are scanned for several diseases, including Covid-19, at receiving centres near the border. But it has not been easy to control movements of those coming from the DRC, with many of them refusing to go to reception centres for screening, opting to remain along the border as they wait for fighting to subside.

“In fear of being processed as refugees, many set up temporary shelters at the border where they mix with the local communities,” Uganda Red Cross spokesperson Irene Nakasiita told The EastAfrican on Thursday.

By Thursday, official data showed that Uganda had administered 21.7 million vaccine doses, of which 16 million were single doses and 10 million double doses.

The country has a target of vaccinating about 21.9 million people, which is 49 percent of the population.

And although there is no official date data on how many Covid-19 cases have been detected among the refugees, Uganda health officials are still worried they pose a health risk.

As of Wednesday, there was a daily average of 98 new detected cases and the National Planning Authority says there will be more than 1,000 new infections by end of this week.

Covid-19 cases have been on the rise in East Africa, with governments’ vaccination campaigns having slowed down

Kenya’s positivity rate stood at 12 percent as at Thursday, a level the World Health Organisation considers threatening enough to call for a lockdown. The government has now ordered mandatory wearing of masks in congested spaces and in all public transport.

Tanzania’s Health ministry says it recorded 68 Covid-19 cases between April and May and this number rose to 161 new cases from May 5 to June 4, representing a 100 percent surge.

Uganda Health officials attribute the low vaccine uptake to a lack of medical personnel, logistics challenges and lack of information, especially in rural areas where people still shun the vaccine.

The country is facing the expiry of over six million doses of vaccines worth over Ush333 billion ($88.65 million) in the next three months, according to Minister for Health Jane Ruth Aceng.

In a Cabinet report last Monday, Dr Aceng said “the low rate of utilisation of the vaccines started when the third wave was controlled and the economy reopened in January 2022, which affected the seriousness of the risk perception. This was compounded by myths and misconceptions on social media and worsened by negative activists who are decampaigning vaccination.”

However, governments in both Kenya and Uganda have no plans of introducing lockdowns to contain the infections, but are pushing for vaccination.

In Uganda, plans to vaccinate school-going children were halted after Education ministry officials rejected the proposal arguing that schools are not gazetted health facilities.

Many parents are also against the idea of vaccinating their children and fear they could be forcefully jabbed in school although the Health ministry has assured that no child will be vaccinated without the consent of parents.

“We are surely going to vaccinate the children but from ages 12 to 17 only during the holidays and their parents have consented. We shall give them the Pfizer vaccine,” said Health ministry spokesperson Emmanuel Ainebyona said.