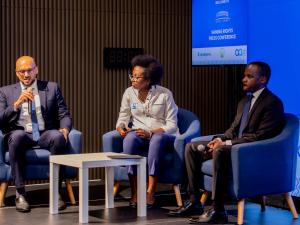 The Kigali Arena has been rebranded to BK Arena after Bank of Kigali reached a Rwf7 billion agreement for the multipurpose facility's naming rights.

The six-year deal, the first of its kind for the 10,000-seat venue, was announced Tuesday, May 24, at the state-of-the-art facility’s headquarters after several months of talks between the bank and venue management, QA Solutions.

It’s a deal that BK Chief Executive Diane Karusisi described as ‘historic’ given the timing of announcing the naming rights agreement which came in the middle of the ongoing Basketball Africa League beside from which the bank is anticipating to grow its brand from sports and entertainment events hosted at the state-of-the-art facility.

“This is historic for us at BK. At BK, we don’t just do financial services. We enable industries, we enable ecosystems and we believe that there is a huge business in sports and entertainment and we want to be up there,” Karusisi said.

“BK, as an organization, has been working more with corporates…we want to connect more with people, especially youth, and there is no better way to connect with the youth than being where they are and reaching them here at BK Arena,” she added.

The deal means the government is beginning to reap from efforts it has for the past few years been investing in infrastructure in sports and entertainment as part of diversifying the country’s tourism sector.

“A partnership like this is going to create mass revenues of what we did as the government investing in infrastructure. We are grateful to see a cooperation like BK Group coming on board to help us create more impact,” RDB Deputy CEO Zephanie Niyonkuru said.

The government wants to position the country as a sports hub and hence host several events that can help generate revenue that can contribute to the country’s economic recovery.

The new partnership will not only help the government in its economic recovery but also help to strengthen the connection that BK as a brand has with the youth.

“What happens in this Arena is all about sports and entertainment and it’s where you find a lot of youth. We want youth to know our brand, to think about BK when they want to do transactions, open a bank account and we believe if we are able to capture a very large market share in the youth it will be very beneficial for us for a very long time.” Karusisi said.

What’s in the deal?

The agreement allows Bank of Kigali the right to display its products across the venue, be it outside and inside, during different sports and entertainment events held at the facility, as part of the bank’s plans to grow its visibility within a wider audience gathering at the arena.

A pre-paid card has also been introduced so clients coming for sports and entertainment events can use it while shopping from the venue’s various spots like restaurants among other services.

The deal comes after BK ended their interest in sponsoring the national Basketball after four years (2018-2022).

Karusisi, however, said the financial institution remains committed to investing in sports and the new deal means they only changed the approach of investing in the sector, including basketball.

How long will the deal take?

The deal will last for a period of six years but, according to Karusisi, the bank will be open to extending the deal to as many more years as possible as long as it pays dividends.