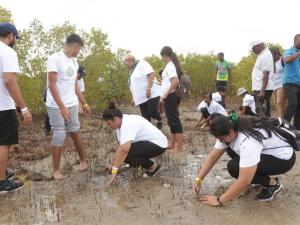 Speaking after the activity in Kigamboni, Mr Robert Muganzi, who is the AKF senior project officer heading the Department of Environment, Climate Change, Agriculture and Empowerment, said the efforts aimed at reducing carbon dioxide in the environment will help to mitigate the effects of climate change.
“This is just the start. We plan to plant more mangrove trees, up to one million, along Tanzania’s Indian Ocean coast to Mtwara, starting from today to September 2023,” he said.

The secretary of the Kigamboni Beach Management Unit (BMU), Mr Juma Abdallah, said mangroves are affected by human activities, including their use as firewood for frying fish and burning charcoal.
“If we continue like this, temperature will increase, we will not get rain, and, even worse, our homes will be in danger because the sea could overflow and cause floods,” he said.

One of the volunteering students, Shanila Shamshuddin, said they had learnt about the importance of mangroves to the Tanzanian coastal ecosystem and climate adaptation, and that is why they have decided to undertake the activity.

Meanwhile, the Diplomatic Representative of The Aga Khan Development Network (AKDN), Mr Amin Kurji, said continuous education should be given to people so that they know the importance of protecting the environment.
“Many do not understand the importance of taking care of the environment, They throw things into the ocean, engage in improper waste disposal. We think more education is needed,” he said.

Ms Sarah Pima, executive director at Human Dignity and Environment Care Foundation (Hudefo) and Eco hub Tanzania, said they advise people to take care of their surroundings by considering the future, adding that the collected garbage could be recycled.

“After collecting this waste, most of which is plastic, we sort it and recycle some of it. There are many organisations now doing this, so we advise people to join hands with them so that together we can protect our environment,” she said.

The beach cleaning and tree planting activities were held as part of Global Ismaili CIVIC Day celebrations taking place around the world. The global event touches the lives of millions of people, with more than 1.3 million trees planted as part of activities involving more than 30,000 volunteers.
https://www.thecitizen.co.tz/tanzania/news/national/-ismaili-community-c...