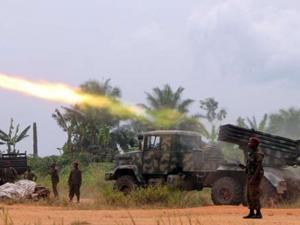 A joint Ugandan and Congolese military offensive is facing a new threat after attackers copied the official army fatigues of the troops to raid villages in eastern Democratic Republic of Congo.

The two sides now think the idea is to turn locals against the armies and ruin the operation that has been touted a success.

On Tuesday, the Armed Forces of the Democratic Republic of Congo (FARDC) and the Uganda People’s Defence Forces (UPDF) warned of possible attacks and sabotage planned by armed groups in the DRC.

Planned attack
A joint communiqué from the two armies, which began the operation on November 30 to track down Ugandan rebels known as the Allied Democratic Forces (ADF), said there is credible intelligence that the group is preparing to launch an attack against civilians while disguised as UPDF soldiers.

Brig-General Flavia Byekwaso and Maj-Gen Léon Richard Kasonga, spokesmen of UPDF and FARDC, respectively, said they “have reliable information on the presence in the region of elements belonging to an armed group with sinister plans to discredit the performance achieved by the joint forces in actions against the ADF rebels based in eastern Congo”.

The UPDF and FARDC revealed that the rebels will use camouflage and uniforms similar to those of the UPDF.

The rebels have "planned to commit atrocities by massacring civilians in order to make it appear that the UPDF has turned against these civilians", the press release said.

And the two sides say the ADF’s aim is to "sully the good reputation of the UPDF and the FARDC", while the two allied armies say that "in the conduct of operations, they respect human rights and international humanitarian law”.

Security
Since November, the forces have reported successes, including the destruction of four ADF training camps and the capture of several masterminds involved in recruiting rebels, as well as freeing of hostages.

But such an operation was always dependent on support from the public. If ADF manages to launch attacks disguised as either of the armies, the soldiers fear public trust could be ruined, making the operation more difficult.

The Ugandan military had worked hard on that by building local feeder roads and providing some humanitarian support to stricken families. There has been no clarity on how long the operation will last, though.

ADF rebels, originally from Uganda, have been hiding in eastern DRC for more than a decade, committing atrocious and massacres on villagers suspected to report on the group.

But Uganda was rattled last November when three separate explosions rocked Kampala, which the group subsequently claimed responsibility for.

Security agencies launched a manhunt in Kampala, arresting several suspects, and ventured into the DRC after President Felix Tshisekedi approved the UPDF joint operation with FARDC.