Kagame and Prince Of Wales hold talks in UK, as Rwanda prepares to host commonwealth gathering 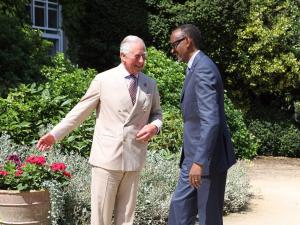 The two met at Highgrove House in Gloucestershire where they discussed the upcoming Commonwealth Heads of Government Meeting (CHOGM) that will be hosted by Rwanda in June 2020, according to office of President Paul Kagame.

In April last year, Rwanda was voted to host the summit, regarded as one of the most expensive gatherings of world leaders – after defeating Pacific island nation of Fiji to become the first African country since neighboring Uganda in 2007.

Kagame’s meeting with Prince of Wales follows support accorded to Rwanda by Commonwealth member States to host the upcoming meeting.

Africa has the biggest membership of Commonwealth (19) followed by Caribbean and Americas (13).

In the East African Community, members include Rwanda, Uganda, United Republic of Tanzania and Kenya.