Kagame and Tshisekedi hold talks in US 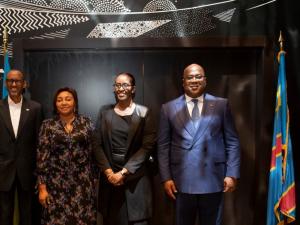 President Paul Kagame hold talks with his counterpart of the Democratic Republic of Congo (DRC), Félix Tshisekedi in the United States where both heads of state attended the 74th United Nations General Assembly.

Their discussions held yesterday evening were also attended by First Lady Jeannette Kagame and her counterpart of DRC, Nyakeru Tshisekedi.

Presidency | Rwanda
@UrugwiroVillage
This evening in New York, President Kagame and First Lady Jeannette Kagame meet with President Félix Tshisekedi and First Lady Denise Nyakeru Tshisekedi of the Democratic Republic of Congo.
President Tshisekedi improved Rwanda, DRC relations since he was installed witnessed through the exchange of visits between both heads of state and signing of MoUs aimed at promoting citizens’ progress.

In May 2019, Kagame visited DRC where tripartite agreements were signed between him, Tshisekedi and Angolan President, João Lourenço.

Signed tri-partite agreements aimed at establishing a joint platform for the three countries to enhance cooperation in the area of security particularly aimed at uprooting all non-state armed groups and end threats to state security and economic cooperation.

Tshisekedi is among heads of state facilitating discussions aimed at putting an end to political turbulence between Rwanda and Uganda that left both countries signing MoUs in Luanda, Angola recently.

DRC forests are home to Democratic Forces for the Liberation of Rwanda (FDLR) for over 20 years.

Towards the end of 2018, Rwanda’s prosecution issued an arrest warrant for Kayumba Nyamwasa and other ring leaders of rebel groups known as P5 or RNC organizing their activities in DRC forests to threaten Rwanda’s security.

The threat of non-state armed groups in the Great Lakes region remains active, with DRC’s forests still hosting both Congolese and foreign terrorist groups that threaten state and regional security.

The groups include the Rwandan terrorist group Democratic Forces for the Liberation of Rwanda (FDLR), which is comprised of remnants of the genocidal forces that killed more than a million Rwandans during the 1994 Genocide against the Tutsi.

Through collaboration with FARDC, the national army of the Democratic Republic of Congo, some FDLR commanders including Laforge Fils Bazeye, FDLR spokesperson and chief spy Lieutenant-Colonel Abega have been arrested and sent back to Rwanda to face justice.

They were arrested last year returning from Uganda in a meeting intended to threaten Rwanda’s security.

In July 2019, Kagame said that Rwanda is ready to provide support to fight armed groups based in the Democratic Republic of Congo (DRC) and welcomed the idea of his DRC counterpart Félix Tshisekedi who recently unveiled willingness to collaborate with neighboring countries to fix the issue.
Langues:
English
Thématiques:
Politique, Sécurité