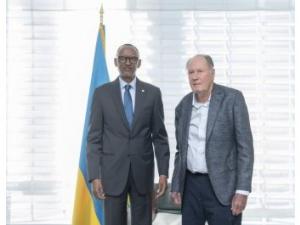 David Bonderman,79, is among tycoons in the USA whose net worth is estimated at $6.5 billion, according to Forbes.
He has invested in diverse businesses including TPG Capital, Boston Celtics Basketball Team and Seattle Kraken, a professional ice hockey team based in Seattle.

President Kagame held talks with the businessman on Friday 23rd September 2022 in the United States.
Their discussions on investment opportunities in Rwanda were also attended by the CEO of Rwanda Development Board (RDB), Clare Akamanzi and Francis Gatare, Senior Economic Advisor to the President.

In 2015, David Bonderman announced a plan to invest in Africa through TPG Capital in which he owns shares.
He would partner with Sudanese businessman, Mo Ibrahim to run the investment on the African continent.

Apart from being a businessman, David Bonderman is also a philanthropist running different biodiversity conservation projects in Africa.
Through Wildcat Foundation, he has massively contributed to the fight against poachers killing elephants and rhinos to sell their tusks.
https://en.igihe.com/news/article/kagame-businessman-david-bonderman-dis...