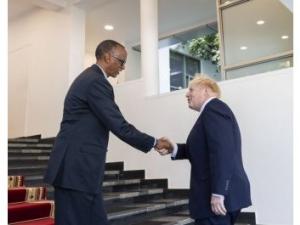 President Paul Kagame has received Boris Johnson, Prime Minister of the United Kingdom (UK) with whom they held talks on topics including the recent Migration and Economic Development Partnership between both countries that will see migrants and asylum seekers staying illegally in the UK deported to Rwanda.
Johnson has arrived in Rwanda to attend Commonwealth Heads of Government Meeting (CHOGM) 2022 taking place in Kigali, the capital of Rwanda.

“President Kagame received the Rt. Hon Boris Johnson, Prime Minister of the United Kingdom who is in Kigali for #CHOGM2022. The two leaders held talks on existing partnerships between Rwanda and the UK including the recent Migration and Economic Development Partnership,” Rwanda’s Presidency has revealed via Twitter handle.

Rwanda and UK signed the partnership on 14th April 2022. Under this partnership, the UK will provide an upfront investment of £120 million to fund invaluable opportunities for Rwandans and migrants including secondary qualifications, vocational and skills training, language lessons and higher education.
These asylum seekers from African countries and others outside the continent will be treated decently like Rwandans upon arrival. It is expected that those willing to return to their mother lands will be helped to do so.

The plane carrying the first batch of migrants deported from UK to Rwanda under the recently signed Migration and Economic Development Partnership was expected to land in Kigali on Wednesday 15th June 2022.
Few hours before scheduled time for the plane to take off, the flight was stopped after a late intervention from the European Court of Human Rights (ECtHR) led to fresh challenges in the UK courts.

After the judgement from the ECtHR, passengers were removed from the plane which had to take off on Tuesday at 11:30 p.m. of Kigali Time.
The human rights court said that it had suspended the deportation of one migrant from Iraq who was onboard the plane.
It also maintained that UK must wait for the final judgement next month before further action.

Following the last minute cancellation ; the Spokesperson of the Government of Rwanda, Yolande Makolo has said that Rwanda remains committed to welcome the migrants when they arrive.

“We are not deterred by these developments. Rwanda remains fully committed to making this partnership work. The current situation of people making dangerous journeys cannot continue as it is causing untold suffering to so many,” she said.
"Rwanda stands ready to receive the migrants when they do arrive and offer them safety and opportunity in our country,” added Makolo.
https://en.igihe.com/news/article/kagame-holds-talks-with-boris-johnson-...