Kagame in Kinshasa for conference on Positive Masculinity 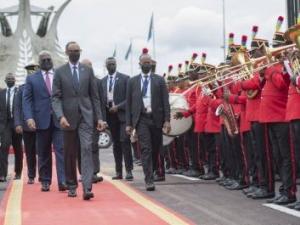 President Paul Kagame has arrived in Kinshasa, the capital of Democratic Republic of Congo (DRC) to attend the men’s conference on Positive Masculinity hosted by President Félix Tshisekedi, the incumbent Chairperson of African Union (AU).

Upon arrival, Kagame was received by Prime Minister Lukonde Sama and later welcomed by his counterpart of DRC, Félix Tshisekedi to Palais de la Nation in Kinshasa for bilateral talks ahead of the Men’s Conference on Positive Masculinity.

“This invitation and conference have come in at the right time to renew the friendship and cooperation between our two brotherly countries DRC and Rwanda,” he said.

Kagame joins African Heads of State and Government including the President of South Africa, Cyril Ramaphosa, Macky Sall of Senegal and Nana Akufo-Addo of Ghana are among others.

The meeting is also hosted in partnership with the African Women Leaders Network (AWLN) under its patron, Ellen-Johnson Sirleaf who is also a former President of the Republic of Liberia.

The Men’s Conference also aims to secure commitment to create enabling environments to ensure an increase in the numbers of women in leadership at all levels, including as heads of state, government and other sectors to take this agenda forward while also creating political ownership of the AU Campaign on ending Violence Against Women and Girls (VAWG) at national level.

Leaders representing governments, business, youth, traditional and religious sectors, among others, are also expected to adopt a declaration with concrete actions and strategies to enhance men’s leadership and role towards ending VAWG, in their various capacities.

The declaration will inform the engagement of African men and boys going forward.
http://en.igihe.com/news/article/kagame-in-kinshasa-for-conference-on-po...