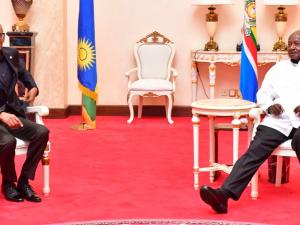 The two leaders agreed to push for regional peace and stability by jointly addressing the security situation in the Democratic Republic of Congo, as part of the East African Community.

The talks came on the backdrop of last week’s meeting in Nairobi by the bloc’s Heads of State in which they agreed to set up a regional military force bent on ending decades of insecurity in eastern DRC, caused by militia groups.

DR Congo in early April signed the treaty of accession into the EAC, becoming the seventh member of the bloc.

The decision of the bloc was welcomed by the United Nations Secretary-General Antonio Guterres who said that the UN fully supports the initiative by the East African countries to bring peace in eastern DRC.

The meeting in Nairobi also inviting warring groups to resolve their differences through talks and some were invited to Nairobi.

On Sunday, in a meeting at State House Entebbe, Museveni briefed Kagame about the talks that were held in Nairobi.

According to a statement from State House, Museveni assured his Rwandan counterpart who was on a one day private visit that the problems affecting the region like the crisis in DRC needed collective approach from all regional members.

“This time we must insist on working together because these people have suffered a lot. I told President Kenyatta that if we don’t come in as a region, Congo may become like Sudan,” Museveni said.

Kagame also said the DRC problem can be resolved if leaders of all the armed groups hold talks and agree on a way forward.

“They need to talk without leaving anyone behind,” Kagame said according to the State House statement.

Kagame, later on, on an invitation by the Ugandan leader and the first Lady Janet Museveni, attended a birthday celebration dinner in honour of their son Lt Gen Muhoozi Kainerugaba who turned 48.

This was the first time the Rwandan President has visited Uganda since March 2018. There had been heightened tensions between the two countries since 2018 that saw Kigali close its common border with Uganda.

Rwanda then accused Uganda of harassing its nationals and supporting dissidents bent on removing the government in Kigali while Kampala accused Rwanda of conducting illegal espionage on its soil.

The two countries have since held several talks to normalise relations and the border was reopened.