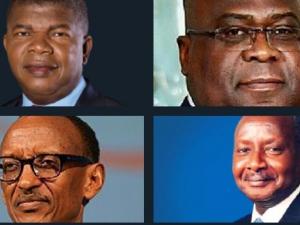 This regional summit is due to take place tomorrow on Friday, July 12, 2019, in Luanda capital, Angola

According the statement issued on Twitter by the Angolan Foreign Affairs Ministry, the meeting which was called by Angolan President João Lourenço will be attended by Presidents Paul Kagame, Felix Tshisekedi and President Yoweri Kaguta Museveni and will discuss security in the Great Lakes Region and regional cooperation among other things.

President João Lourenço has invited for a Quadripartite Summit this Friday (12/07/2019), in Luanda, the Presidents of the DRC, Félix Tshisekedi; of Rwanda, Paul Kagame and of Uganda, Yoweri Museveni. Security and regional matters will be at the centre of the Summit.

It is not yet clear if the issues concerning Rwanda and Uganda will be brought to the table.

Rwanda maintains that Uganda is harbouring groups with intent to destabilize the country, mainly Rwanda National Congress (RNC), a subversive group which Rwanda says has heavy presence in Uganda and the backing of Kampala.

The meeting will among other things discuss how to uproot all negative groups operating in DRC responsible for insecurity in the region.

President Kagame at the beginning of this month said that Rwanda would not hesitate to support DRC if called upon in efforts by the vast nation to fight the rebel groups that have operated in the eastern part of the country for decades.

Last month, President Tshisekedi said that he will be sending the army to fight rebel groups operating in the country and to end communal violence which has plagued the country, claiming hundreds of lives.

President Tshisekedi said the “large-scale” military operations would focus on eradicating foreign armed groups –a move President Kagame said is welcome because the negative rebel groups have been a problem for so long.

Kagame said that Rwanda would go as soon as ‘yesterday’ if DRC asked for support and that this is something Kigali has been waiting for.

Rwanda maintains that different negative groups including the Democratic Forces for the Liberation of Rwanda (FDLR) and the P5 alliance which includes Rwanda National Congress (RNC) continue to operate in DRC where they have bases.

President Kagame, who in recent months has strengthened ties with his Congolese counterpart, said that he is happy that President Tshisekedi is looking at things in this perspective and willing to address the longstanding conflict that has ravaged the vast nation.

At the end of May, during a visit to Kinshasa, Presidents Kagame, Tshisekedi and their Angolan counterpart Lourenço agreed to work together to uproot negative groups operating in the Great Lakes Region in a bid to create sustainable peace.